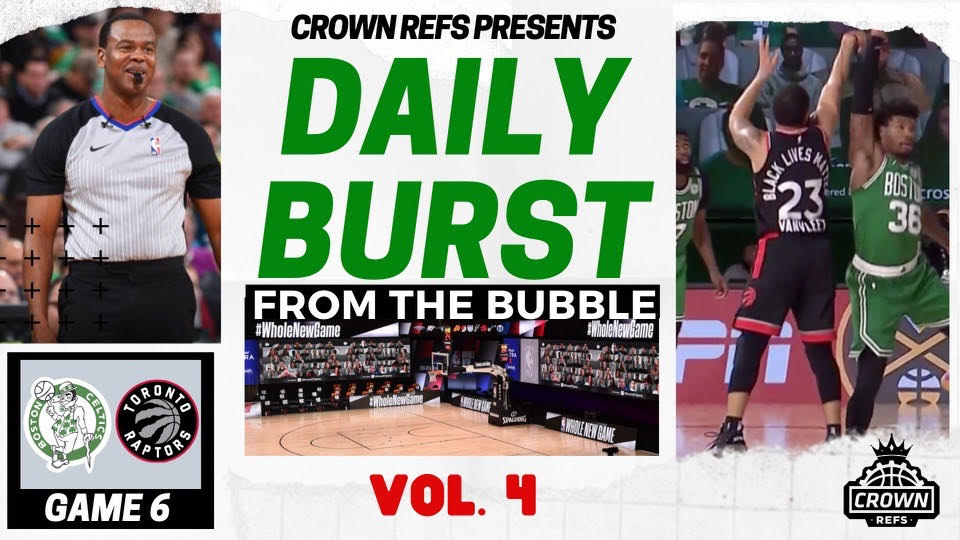 In today’s fourth volume of Daily Burst from the Bubble, we spotlight game 6 of the Celtics and Raptors series.

Our featured play comes with 7:36 left in the 3rd quarter in a tight game, which eventually needed two overtime periods to decide the winning team. The play begins with Fred VanFleet bringing up the ball and setting up for a 3 point shot.

As always, before get dive into the featured play, let’s introduce our official, Sean Wright #4. 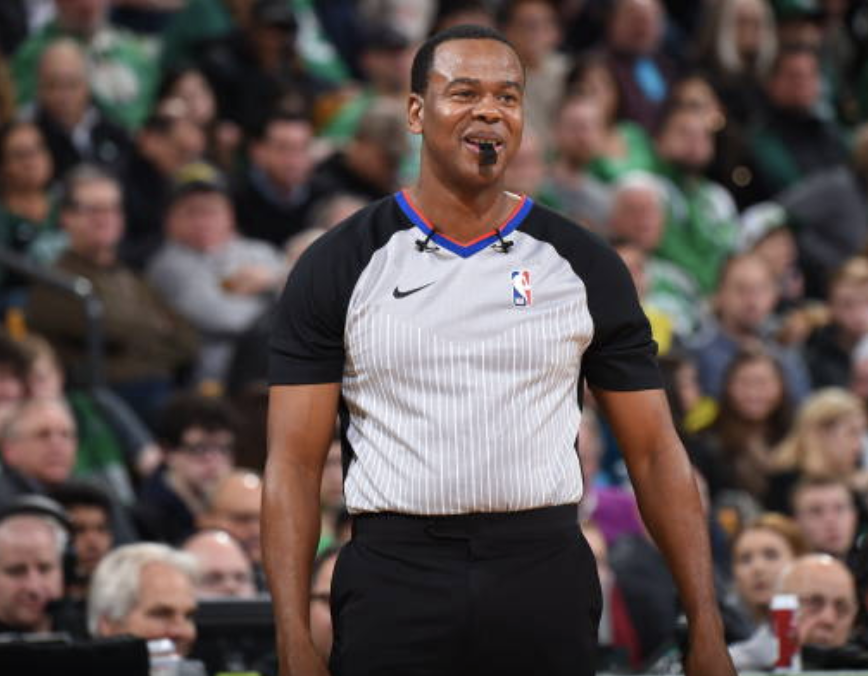 Going into his 15th season as an NBA referee, Sean has officiated 842 regular-season games and 53 playoff games.

It’s always interesting to see the journey each official has taken to get to the NBA. In Wright’s case, he officiated the NBA G League, where he worked the 2004 playoffs and 2005 Finals.

Before getting his big break in the NBA, at the collegiate level, Wright worked in many conferences that included the likes of SEC, Big South, Ohio Valley, Atlantic Sun conferences.

Sean even had the opportunity to officiate the men’s NCAA Division II Tournament in 2004.

Our featured play starts with VanFleet launching a three point field goal with 7:36 left in the 3rd quarter. The flow of the game at the moment of the call was not a fast break play, but it was a transition from a missed shot from Boston.

You’ll see both the lead official, Tony Brothers, and center official, John Goble get to their positions as the shot goes up. Let’s take a look at Wright’s positioning when he makes his shooting foul. An area that can get officials in trouble is if they’re “stacked.” 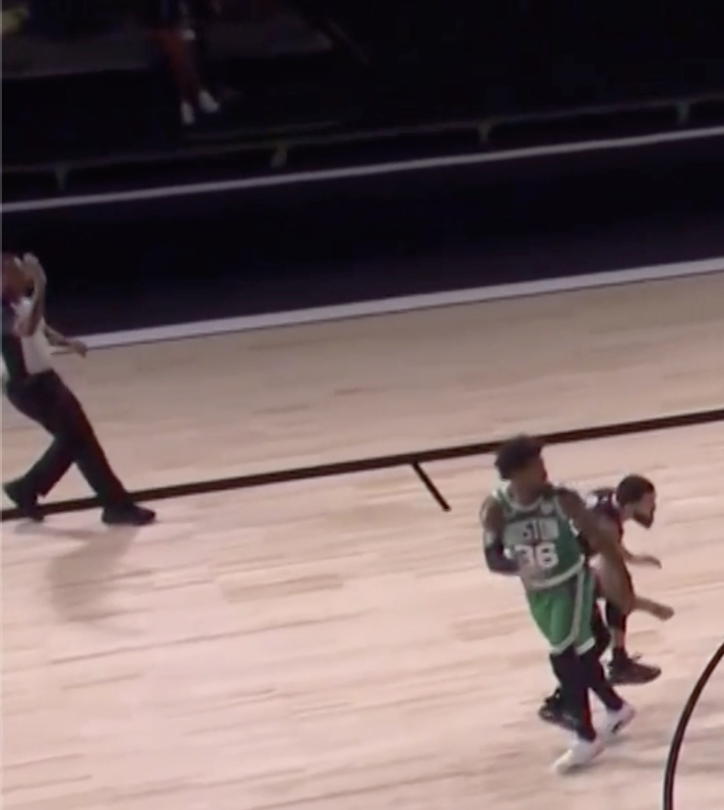 Some officials call it not having a good angle, some call it being ‘straight-lined,’ but I like to call it being stacked because you are stacked on top of the two players. For further context, think of it like a single file line. You, as an official, never want to be lined up directly with the play. We’ve said it before, but this is where angles come into play and why they are so important in making the correct call.

OK, back to the play. Wright does an excellent job hustling down to the play and positioning himself like the professional he is. He must have been reading Volume 3, where we discussed being a ‘Positioning Pro.’

It’s difficult to see at first glance in the video clip, but you’ll notice Wright evaluate the play, watch the shooting motion (looking for illegal contact on the way up) and then focus his attention on the landing and the shooter’s safety.

After watching this play call by Sean Wright; what can you do to learn and improve your game?

Two concepts jump out right away:

On three point attempts (and any shot attempt, really), you should observe the entire play. You don’t want to watch only part of the play and move on.

It may sound cliche, but consider the jump shot as two separate plays.

The two above points may sound like common sense, but many officials, me included, can sometimes watch the shot release and then focus our attention on other areas of the play, rather than staying locked into the play the entire time. 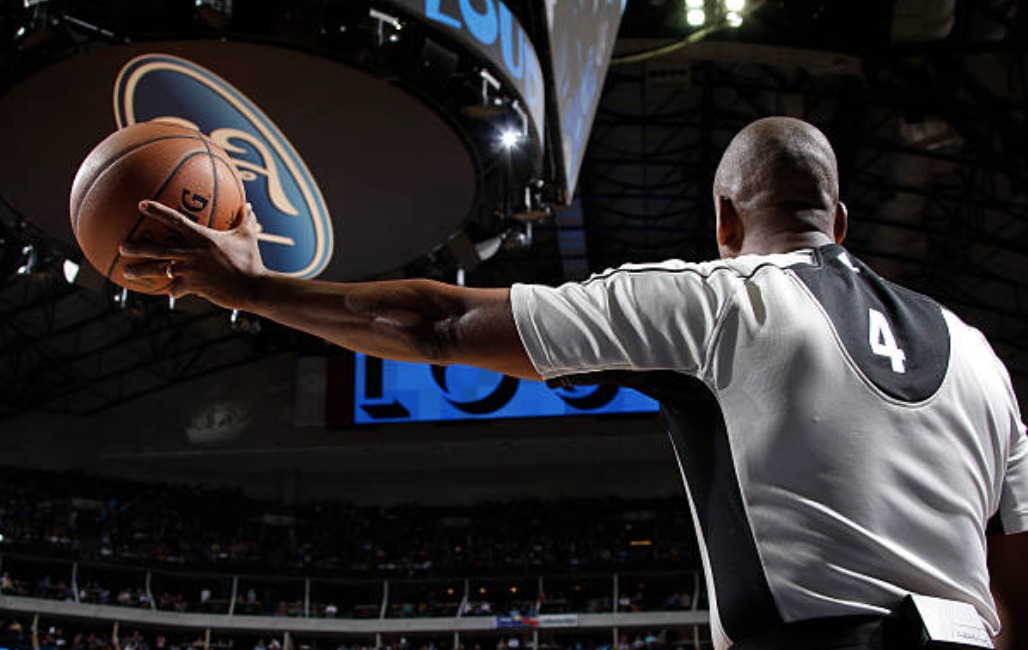 In other words, stay focused on your coverage the entire shooting motion – the release and the landing.

2017 was a big year for NBA officiating. Two rules were implemented that really helped the game and made it a safer space for everyone involved.

As you’ll see in the above video, Zaza did not allow Kawhi to safely land coming down on his jump shot. The result of this play was injuring Leonard and allowing the NBA to now consider these fouls flagrant.

Another rule that was implemented was to ensure jump shooters are in their upward shooting motion when determining if a perimeter foul is worthy of free throws. This eliminated all of the swinging after completing a pump fake, which further encouraged player safety.

Back to the play! 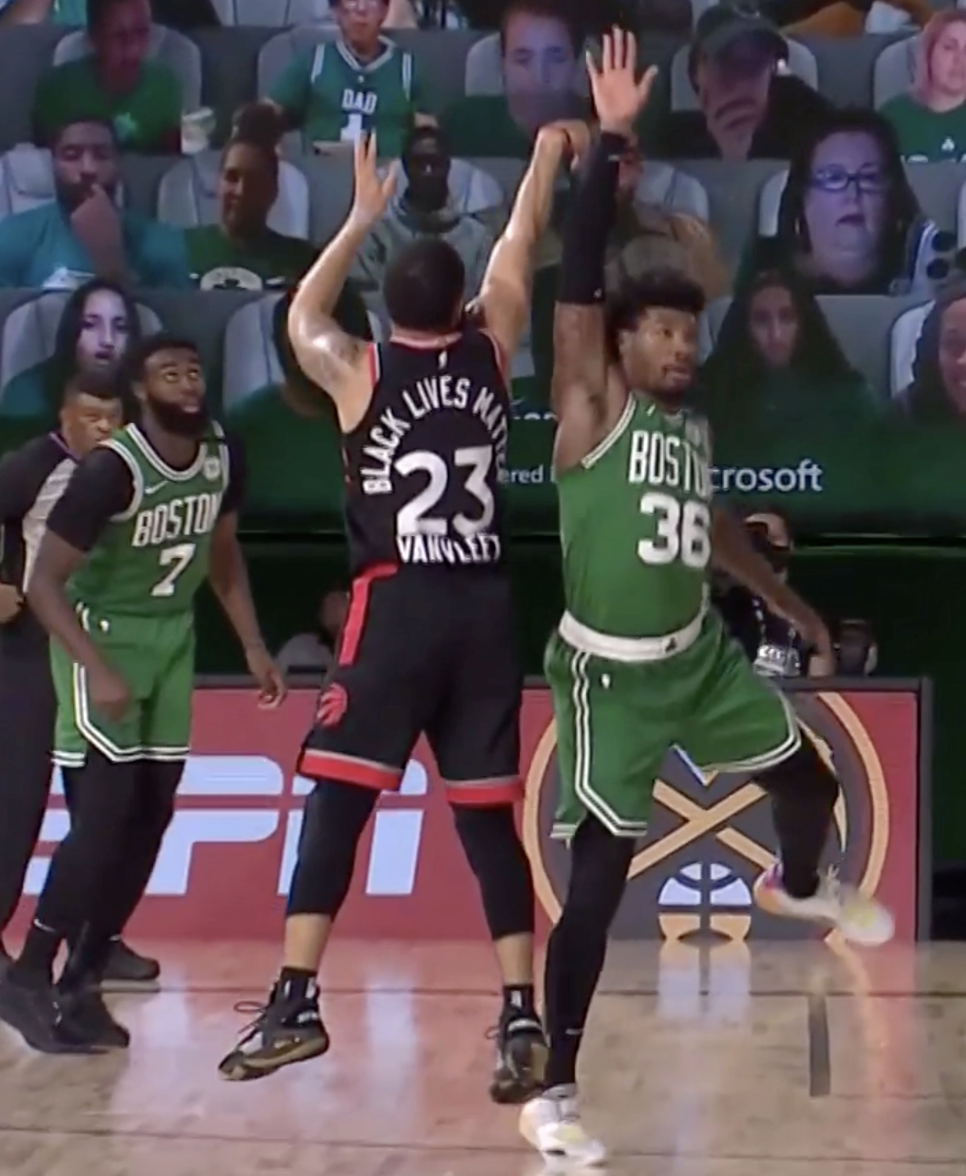 You’ll see VanFleet go up and release the ball with no illegal contact being made. However, the foul comes on the way down, as Smart does not give VanFleet room to safely land.

For plays like this, let’s go to the rulebook. 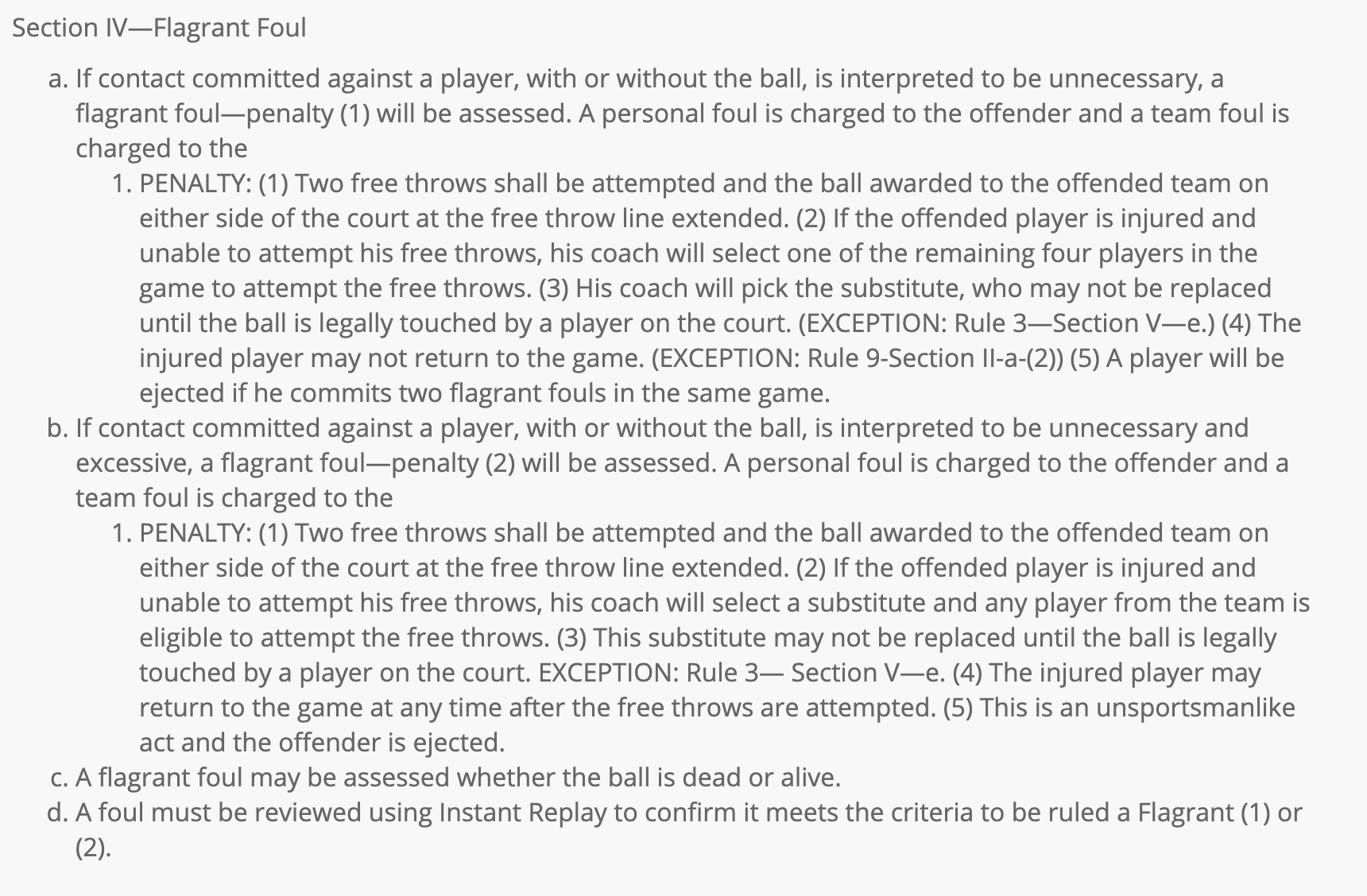 Now that we know what a flagrant foul is, let’s go to the monitor. Was it unnecessary contact made by Marcus Smart? Even though it doesn’t appear Smart intended to foul VanFleet, this does not come into play when determining a foul or not.

As Steve Javie states, “The defender extends his leg…not allowing the shooter to return to his normal position. They’re reviewing it to see if it is unnecessary or wreckless. Usually when the offensive player comes down on top of the foot, they usually call a flagrant foul 1.”

Touch up on your non-common foul knowledge. While we, as officials, don’t wish for flagrant fouls to occur in games we ref, we must be prepared for any situation.

Here’s two tangible ideas for you:

Be a master at your craft and always be prepared, so you can serve the game.

Managing the game after a big play call is made is vital to the rest of the contest. As you’ll hear on the broadcast, the game was starting to get chippy.

The officials did an outstanding job keeping things under control. Making the right decision in the flagrant 1 foul and communicating with each other was key to the success of the play call. 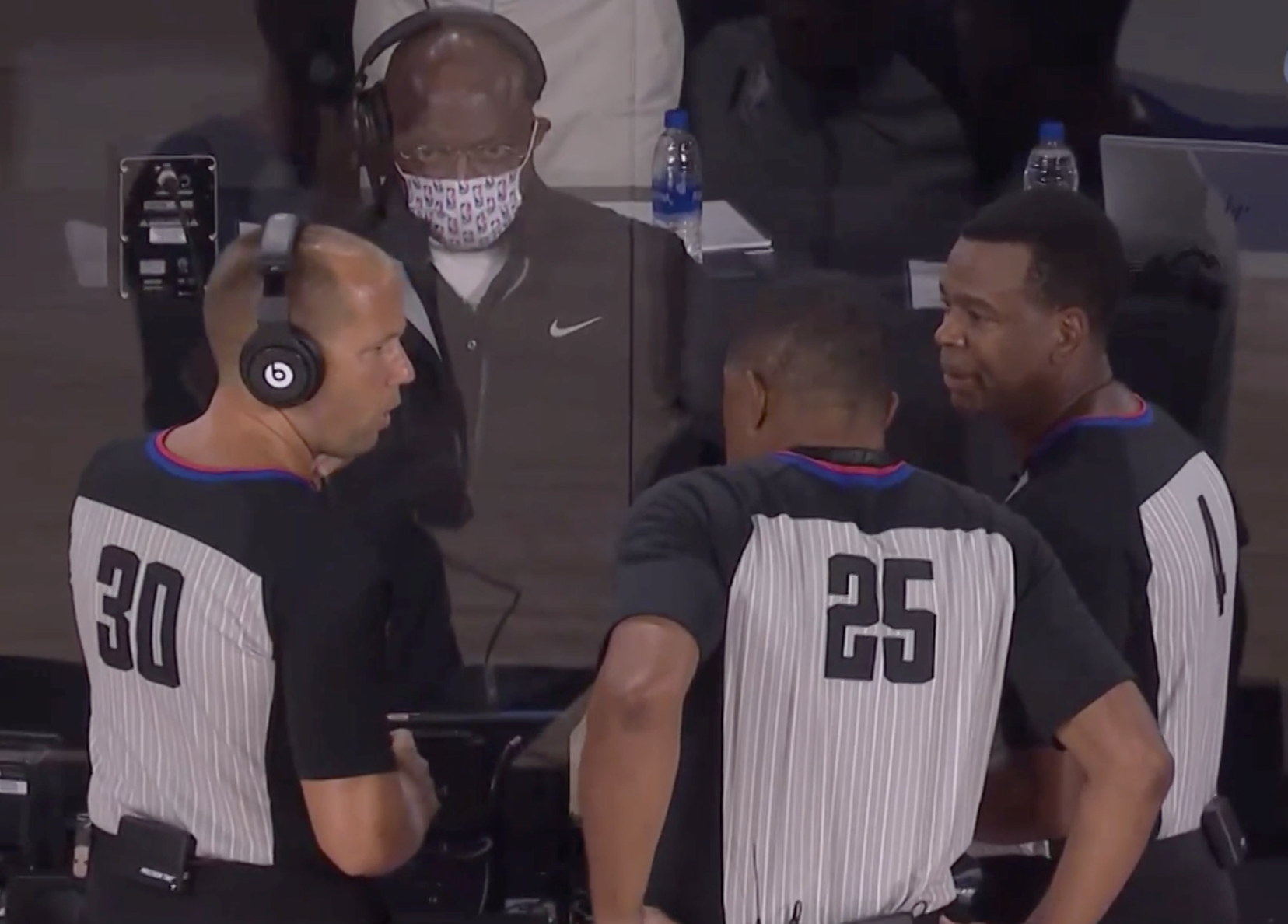 Having a crew that understands and protects the players’ safety is important and will encourage respectful and useful communication between coaches, players and referees.

While Smart may not have meant to foul VanFleet, after watching the replay, he does see he invaded the shooter’s space. If players and coaches acknowledge we are striving to not only make the correct basketball call, according to the rulebook, but also looking to protect players from injury, there will be an extremely smooth game. 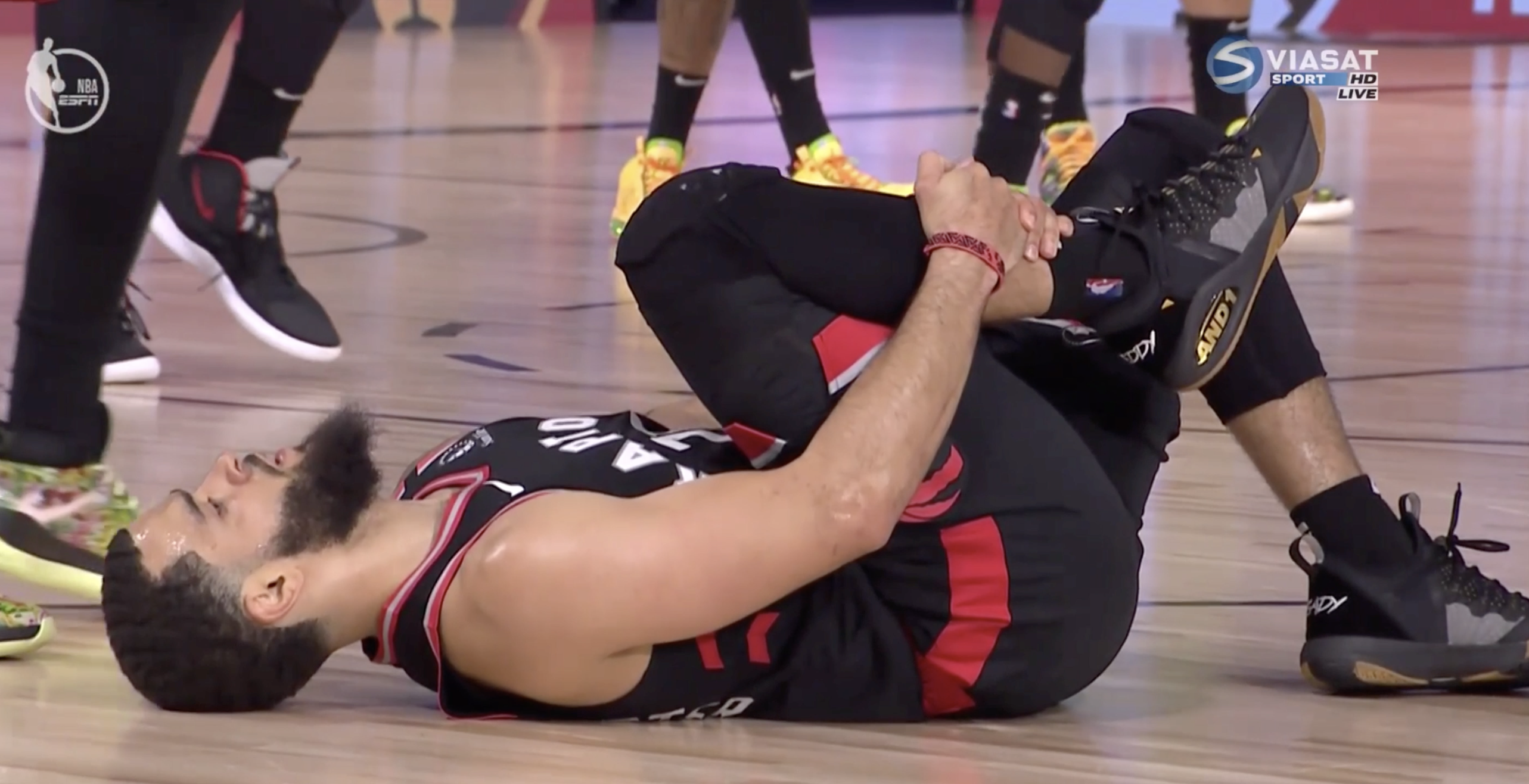 That’s a wrap for Volume 4 of the Daily Burst from the Bubble! Now, here’s the time to get better.