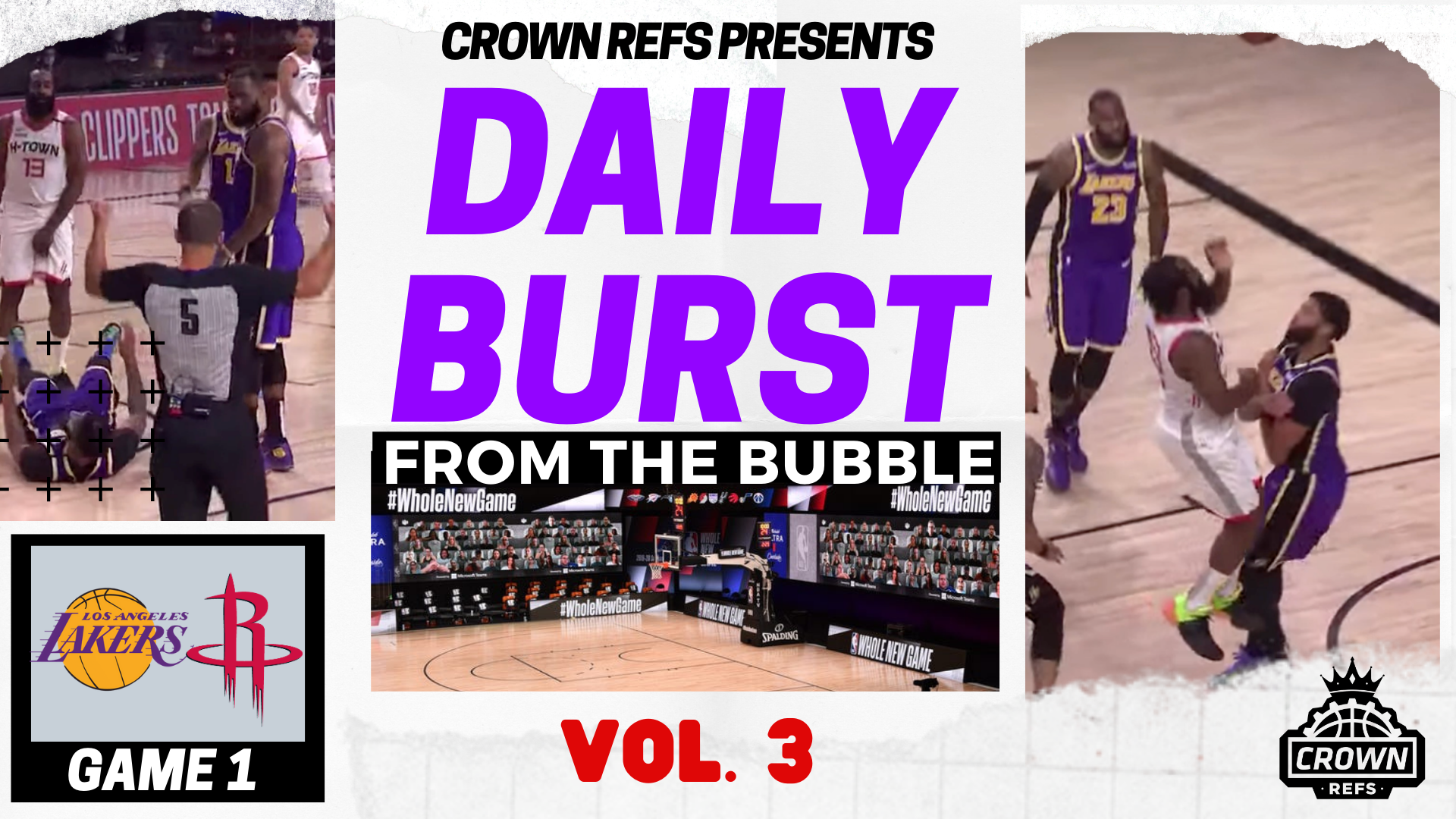 In our third volume of Daily Burst from the Bubble, we highlight Game 1 of the Western Conference Semifinals, featuring the Los Angeles Lakers and Houston Rockets.

Our featured play begins with James Harden crossing over and driving to score from the top of the key. After going into his shot motion and releasing the ball, Anthony Davis slides in to take a charge.

Before we get into the play, let’s take a look at our featured official in Volume 3 – Kane Fitzgerald. Kane is the lead official in our burst video clip.

In his 11th season as an NBA official, Kane has officiated 635 regular-season games, 32 playoff games and one Finals game. He considers his most memorable NBA assignment to be his first NBA Finals: Game 3 of the 2019 Finals between the Warriors and Raptors.

Prior to gaining officiating experience at the professional level, Kane was a part of the officiating staff in the NBA G League for four years and the WNBA for two years.

Before making the leap to the WNBA, he refereed for two years in the Ohio Valley, Atlantic Sun and Big South conferences and started officiating at the NJ high school level at age 18.

The play begins with Harden making a move to the hoop. Being one of the most crafty playmakers of all time, referees always have to be on the lookout when Harden drives the lane. He is known to initiate contact and lure defenders to make a move that allows him to get to the free-throw line multiple times per game.

Once Fitzgerald notices Anthony Davis make a move to take a charge on Harden, you’ll see him take two steps to his right in order to get an angle on the play. 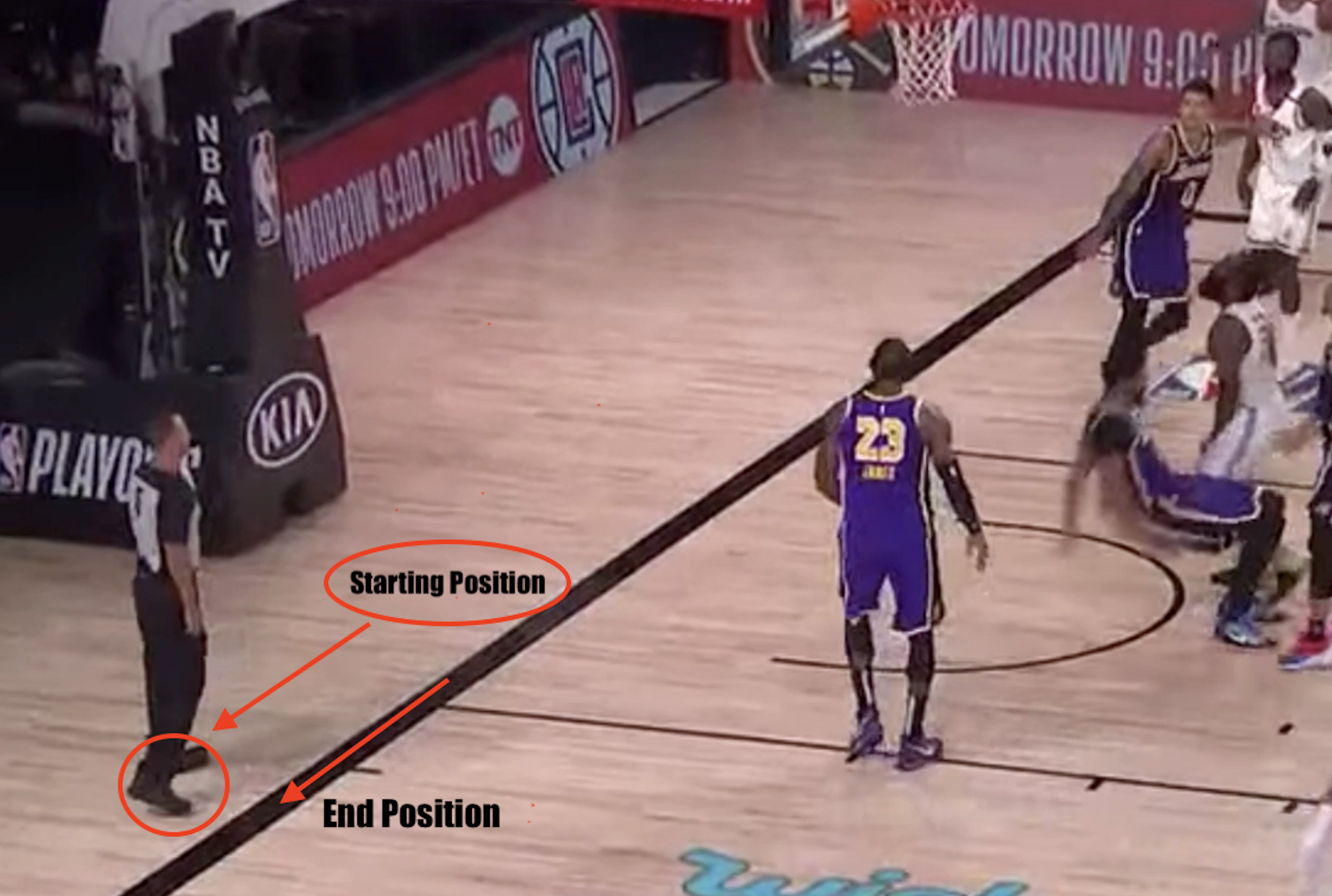 Just like in last volume’s clip, having an angle on the play allows Fitzgerald to be confident and make a call right then and there.

This new angle and positioning that Fitzgerald creates for himself puts him in the perfect position to make the correct call.

While you may not be an NBA or collegiate official, where the restricted area matters in terms of making bang-bang charge/player control fouls, it is still important to understand the difference between a defender establishing and maintaining a legal guarding position vs a defender sliding into position late, while still having his feet established.

Let’s get into more detail in the Play Calling section; as to what exactly you need to look for in the lead position (or any position, really) when it comes to understanding this slight difference.

As we discussed in Volume 2, it’s all about angles. If you are striving to get a good angle on the play, you are putting yourself in the best position to make the correct call. I know it sounds easy and almost like common sense, but the majority of incorrect calls are made because officials are not able to see the complete play due to their angle and positioning.

You may be wondering, “why don’t I just move my head or shoulders to get the best position on the play?”

Well, if you just move your head and shoulders, this will encourage leaning and stretching to get the best view of the play. Can you imagine what you’ll look like to the outside eye (coaches, fans and players) if you’re leaning and just moving your head, rather than showing hustle?

Moving to get the best position not only is the right thing to do to get an angle on the play, but it also makes you appear professional.

Once you move to get the most ideal position on the play, stop and take a look at the play – don’t leave it. Your aim is to never be ‘straight-lined’ or ‘stacked.’ In other words, strive to view angles by looking for the gaps between the players, rather than having your angle blocked by the players’ bodies.

Let’s get to the play, itself. Some of the most heavily debated plays in basketball occur when an official needs to make a charging or blocking foul.

If you’re watching the play for the first time, you might consider this an obvious charging call on Harden. One can see why you might jump to that conclusion, as it appears Davis has his feet established and was outside of the restricted zone.

However, if you watch the play in its entirety, you’ll see Harden begun his shooting motion and released the ball before Davis established himself. 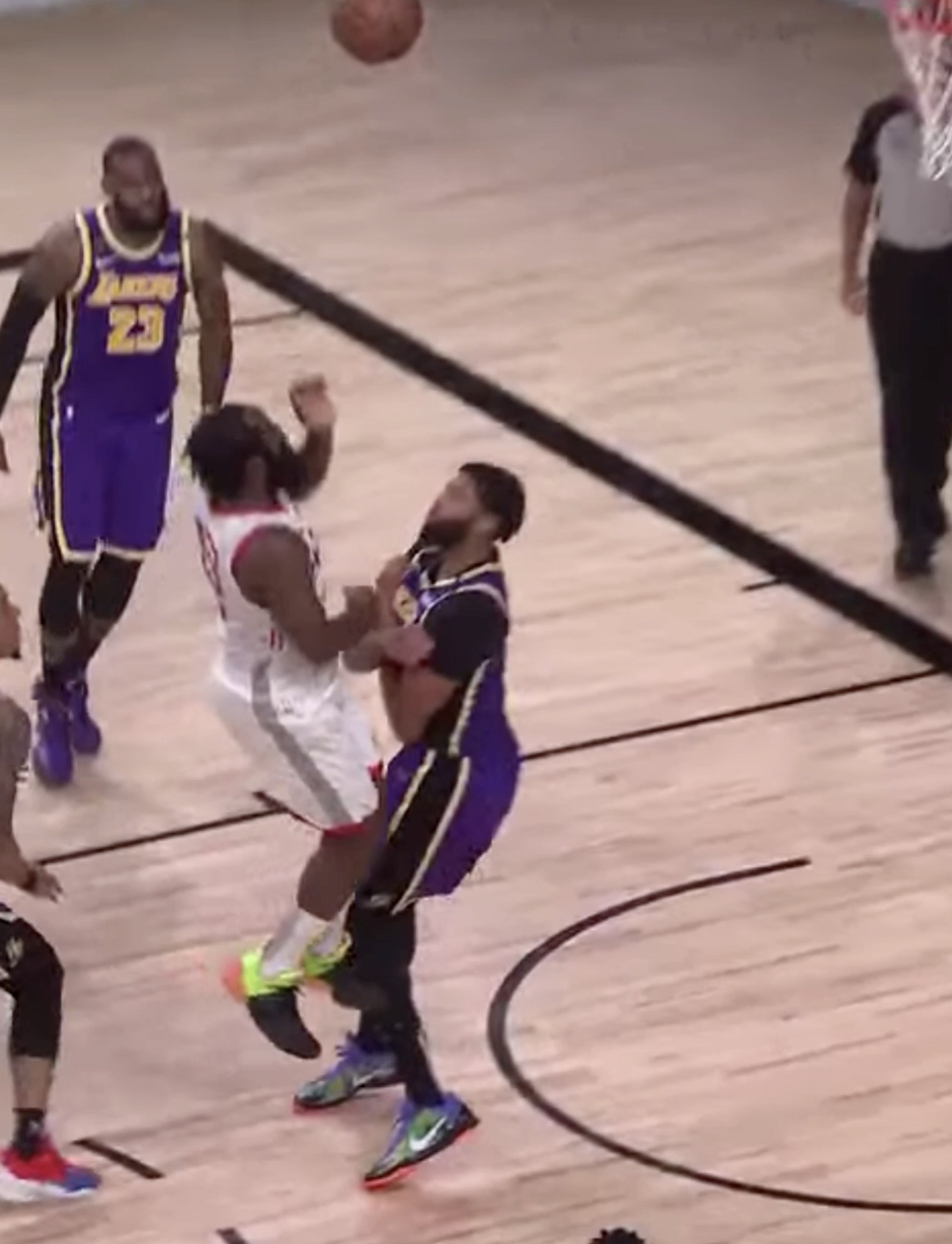 What is a Charge?

Charging is illegal personal contact by pushing or moving into an opponent’s torso.

What is a Block?

Blocking is illegal personal contact with impedes the progress of an opponent with or without the ball.

In other words, a defender needs to be in a certain position before contact in order to draw a charge.

Taking the above into consideration, if you originally thought the play should be deemed a charge, has your stance changed?

The rule regarding whether the ball handler begins his upward shooting motion is different amongst NBA, NCAA and high school rules.

Take another look at the clip. You’ll see Harden begin his shooting motion and begin his landing descent before Davis establishes himself. The defender needs to give the offensive player enough room to land safely, and Davis does not do this.

Since blocking vs charging calls are some of the most difficult bang-bang plays to make in the game of basketball, us officials need to look at the entire environment of the play before making a decision solely based off one aspect (i.e. just looking at the defender’s feet or just looking if the defender was outside the restricted area). 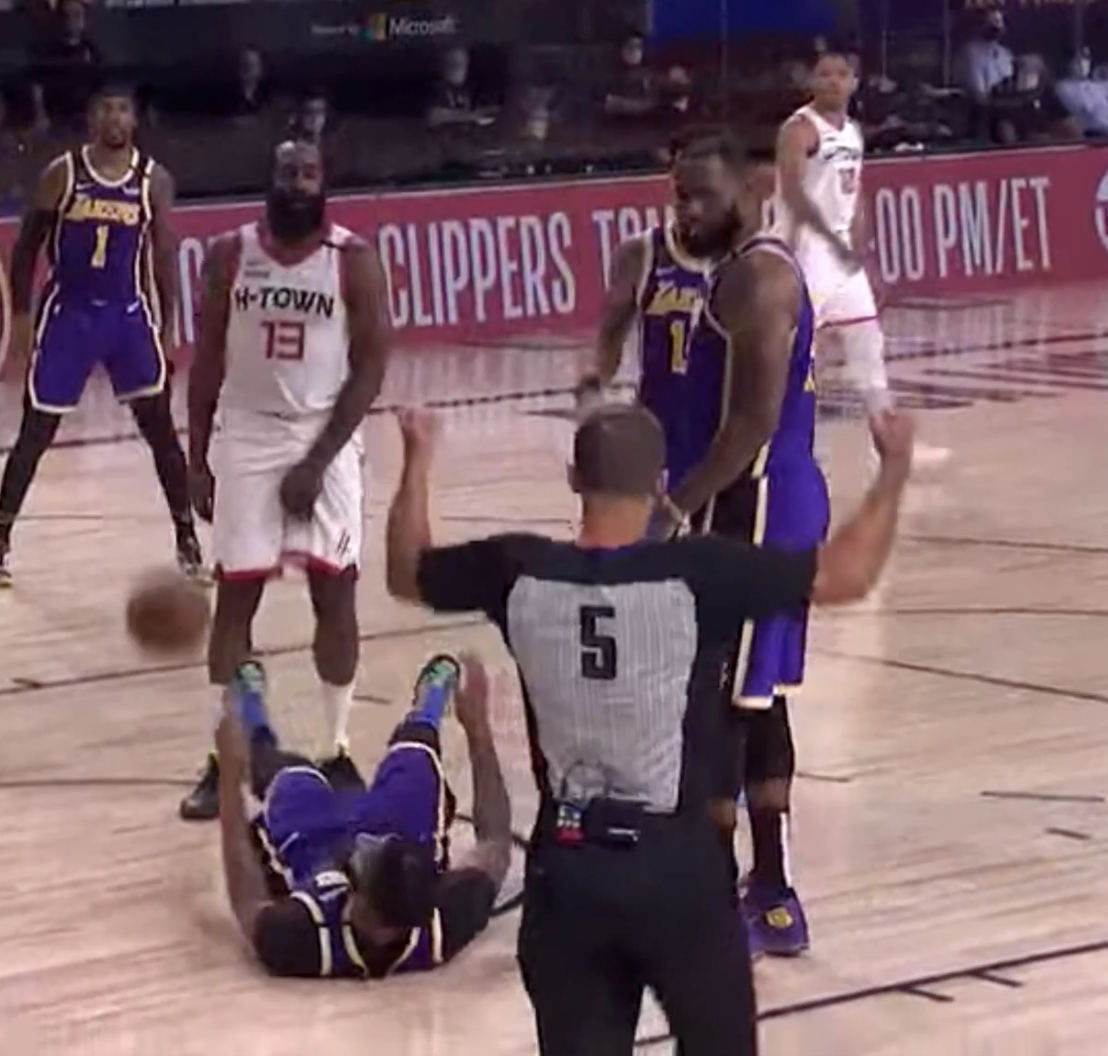 In order to get the call correct, you need to look at a number of other factors that may affect your play calling decision. Is the defender’s upper body in position?

Move with authority to get your position. Move under control and with your eyes on your primary area of coverage. Keep your head on the play at hand, but do not be afraid to move your body at the same time. Once you become comfortable moving your body but locking your eyes on the players you’re responsible for, you will notice the amount of bang-bang calls you correct make skyrocket.

As you can imagine, the majority of time you make a charge/block call, you’re going to receive some sort of reaction from players, fans, coaches or a combination of the group. 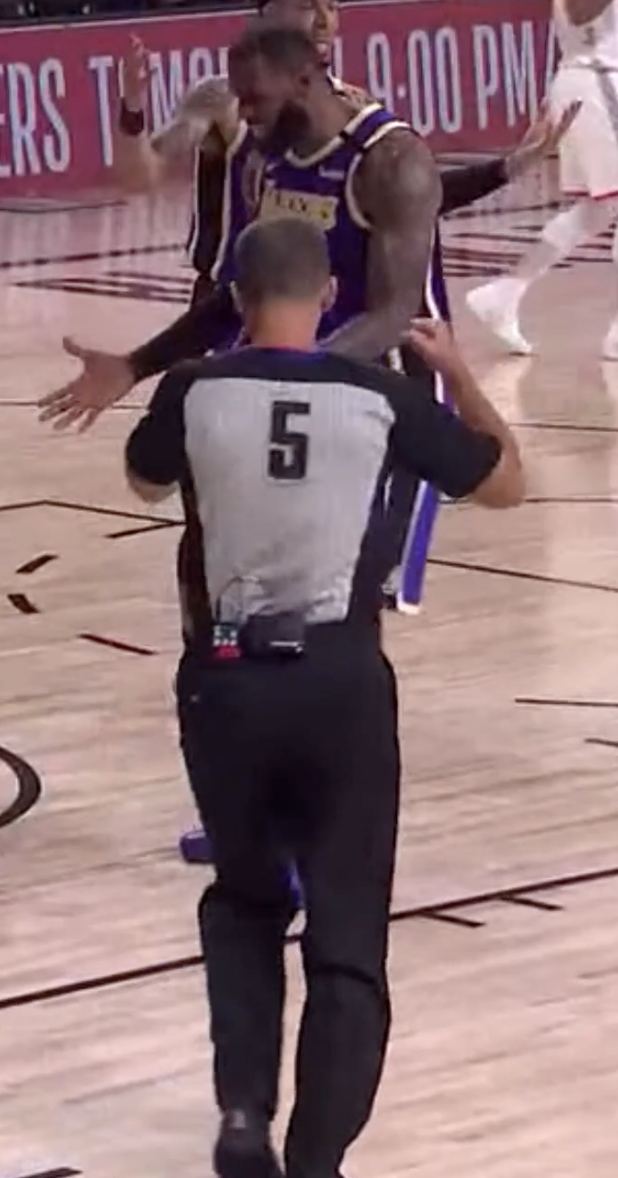 There’s no way around this feedback. However, you’ll see the best referees in the business have the ability to not be reactive when this energy is thrown at them.

We’ve touched on this before, but if an official is confident in their call and clearly communicates the call to the score table and players/coaches (if they ask), they are doing their job.

Being in the lead position when Harden is driving to the basket, Fitzgerald has reffed enough games to understand Harden’s tendency to position his body to get fouled and get to the free-throw line. He does an excellent job in moving to the best position to see Davis undercut him. From there, it’s the easy part. He has seen the play, he has interpreted what the violation is, and now it’s time for one of my personal favorite calls to make (in terms of the mechanics) – the Block/And-One.

Here’s a few items you may find useful when you are put in a situation where you run into a lot of feedback from players or coaches.

Since we’re not all NBA officials and we don’t all have the luxury of a replay monitor, what we can do, as youth, high school, and college officials, is be clear and communicative with all parties involved in the game. Be clear, be confident, be sharp and explain your reasoning, and you will be in a great position as an official.

That’s a wrap for Volume 3 of the Daily Burst from the Bubble! Now, here’s the time to get better.