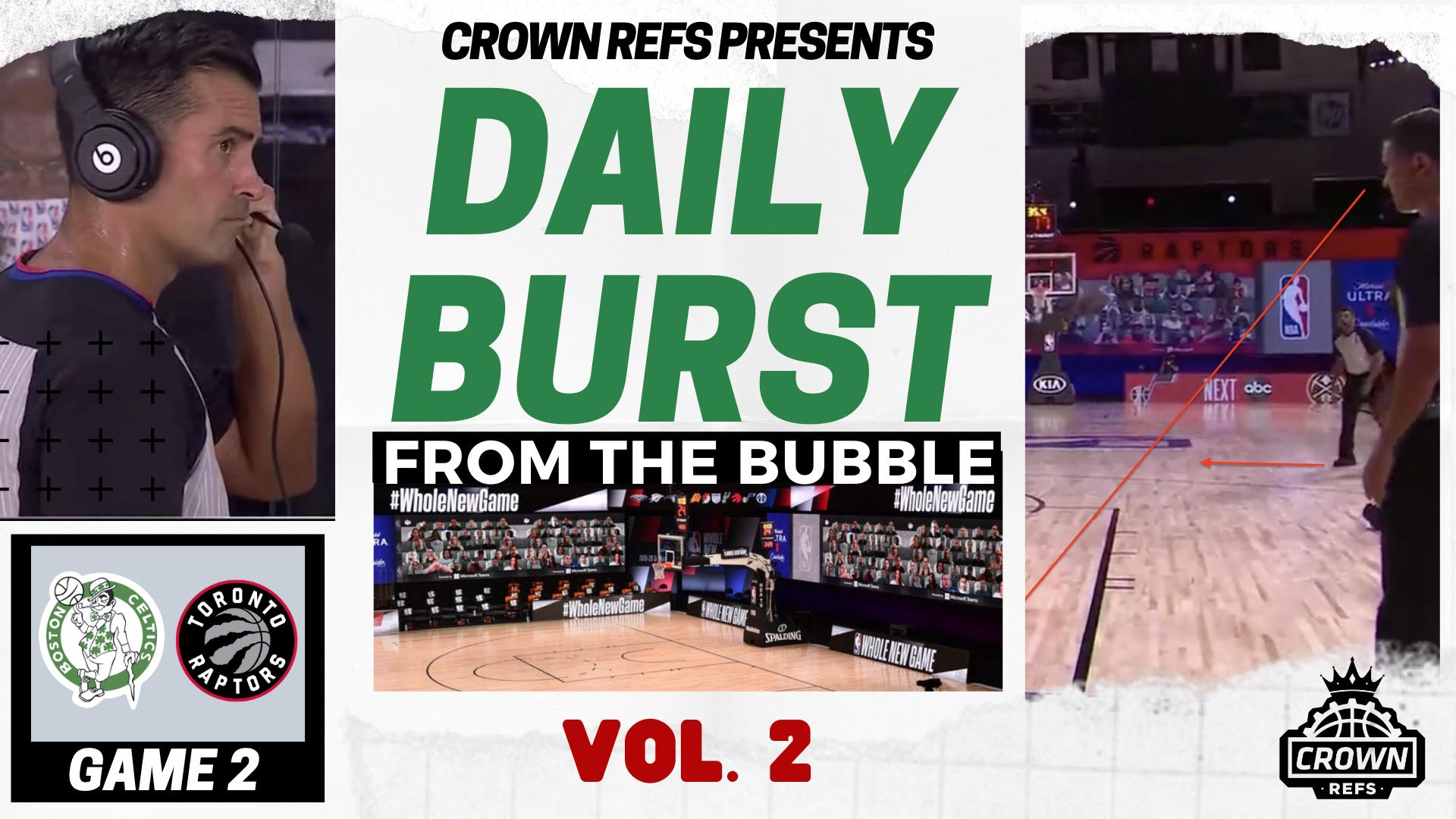 Quick Intro: Lead official Zach Zarba calls out-of-bounds violation on Marcus Smart after making the correct no-call, as Smart strips the ball from Pascal Siakam on his drive to the basket.

In our second volume of Daily Burst from the Bubble, we highlight Game 2 of the Eastern Conference Semifinals, featuring the Toronto Raptors and Boston Celtics.

Our featured play begins with Pascal Siakam driving to score and getting stripped by Marcus Smart.

Before we get into the play, let’s take a look at our featured official in Volume 2 – Zach Zarba. Zach is the lead official in our burst video clip.

Zach Zarba has officiated over 1,000 regular-season games in 16 seasons as an NBA official. He has also officiated 92 playoff games, including seven Finals games.

Before joining the NBA, as was with the first volume’s featured referee, Zarba officiated in the NBA G-League for two years and spent two years reffing in the International Basketball League.

Before working his way up to the collegiate level, Zaraba officiated three years of high school ball back in his native New York.

The play begins with Siakam driving to the hoop. At the moment of the drive, the play was in Tony Brothers, the trail official, primary coverage area. In the clip, you will see Brothers’ eyes follow the drive all the way down the lane. Fred Van Fleet disrupts Brothers’ direct view of the play, so he adjusts by sliding one step to his right to get a better angle on the play. 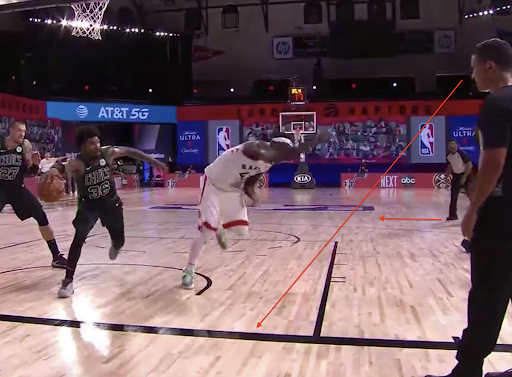 Brothers identifies legal guarding position and a clean strip & steal. As soon as Smart makes an athletic save, Brothers recognizes he is now the new lead with the fast break going the other way. That being said, Brothers is not focused on the end line, as that responsibility has been passed onto Zach Zarba.

Zarba also recognizes the clean strip and immediately brings his attention to the end line. Take a look at his eyes. He is focused on Smart’s feet and whether or not he gets rid of the ball before stepping on the line.

Zarba is in the perfect position to make the correct call. The play occurs right in front of him, and he ensures he has the ideal angle at Smart’s feet and the end line. 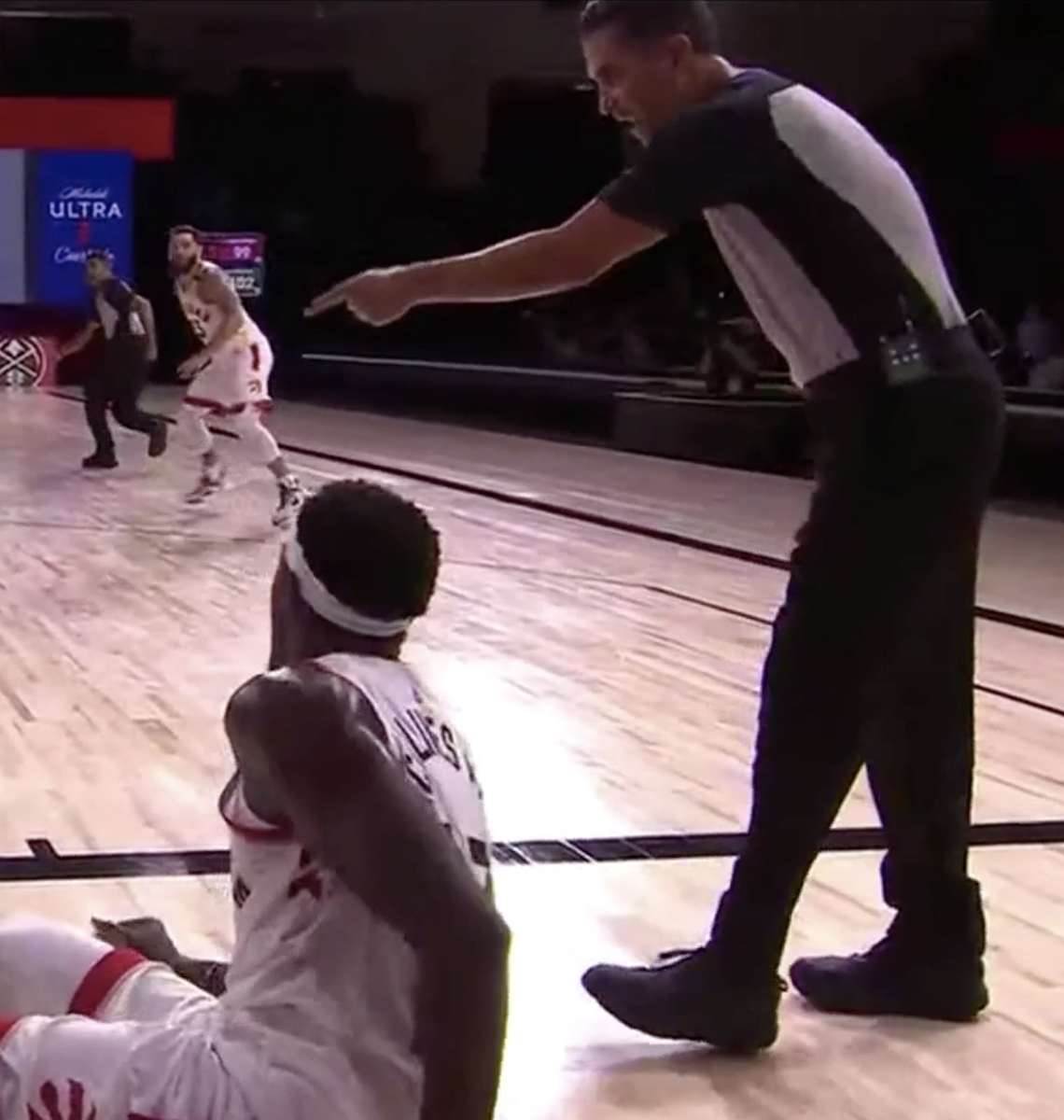 We’ll dive deeper with more detail later in the “Game Management & Communication” section, but it appears Zarba and Brothers had communicated their positioning and primary coverage responsibilities in their pre-game conversations.

Without knowing their decision, as every crew can handle it differently, it appears a drive starting in the trail’s PCA (Primary Coverage Area) all the way to the basket is followed by the trail and picked up by the lead if it is in their PCA. As with every play, officials strive to put themselves in the best position to make the most accurate call decision.

Angles. You’ll see two great examples of how important angles are when it comes to being in proper position. For Brothers (the trail official), he secured perfect position by just sliding one step to his right in order to have the best angle on the drive. What he was looking for was legal guarding position and following the play all the way through.

For Zarba, the tape shows how his focus shifts from deeming a legal play to scanning the end line for Smart’s feet while having an eye on his hands/ball.

So, what does this mean for you as an official? Strive to always get to your best angle. If you’re stuck in a position that doesn’t give you a good view of the play you are responsible for, move! There’s no rules against you moving around.

Zarba shows great poise in his way to make the out-of-bounds violation. He uses his whistle and hands to explain the call being made.

An area of officiating that will only continue to grow as technology advances is the instant replay. To some, going to the replay monitor takes away the human element of the game. To others, having technology to aid officials in making the correct calls provides another method to serving the game the way it should be served. 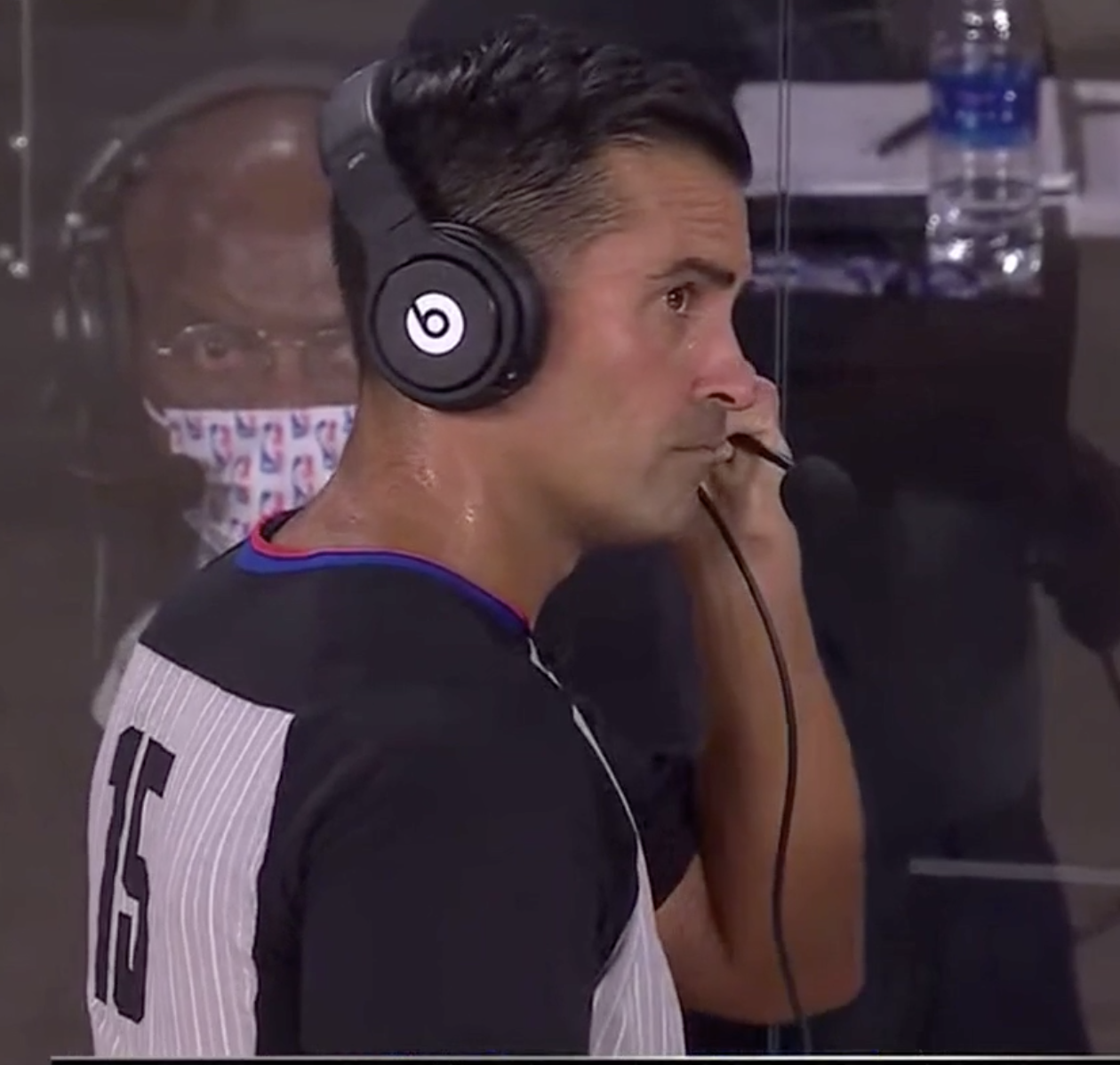 Zarba’s call on the floor was out of bounds on Smart, and, as the replay showed, he was in the right. If you watched the game in real time, you would see how difficult of a call it was to make. And even after looking at multiple angles of the play in slow motion, it is extremely impressive that Zarba made the correct call in the spur of the moment and with such confidence.

Even if you’re not an NBA official or even a collegiate official, understanding when to use replay is vital to moving up in your craft and simply understanding the game from all levels.

Below you can find the NBA guidelines when it comes to going to the monitor. Take a look and let us know if you have any questions regarding when a play should go to replay.

Officials may conduct an instant replay review whenever they are not reasonably certain as to which team should be awarded possession after a ball becomes out of bounds or whether an out of bounds in fact occurred during the last two minutes of regulation and the last two minutes of overtime period(s). Previously, officials could only use replay if they weren’t reasonably certain as to which of two players on opposing teams caused the ball to become out of bounds.

Any time a play goes to the replay monitor, communication is obviously on the forefront. In addition to the players, coaches and (virtual) fans potentially hounding you to make a call in their team’s favor, there is also the elevated pressure of NBA playoff basketball.

What you’ll notice by this game’s crew is their commitment to communicating to each other as they discussed the call before making their final declaration to the official score table.

Another area of officiating that may not be the most intriguing (especially to newer officials) is establishing a pre-game routine.

Every official’s pre-game conversation is different, and it may change as the season progresses.

Here’s a few items you may find useful when it’s time to touch base before tip-off. 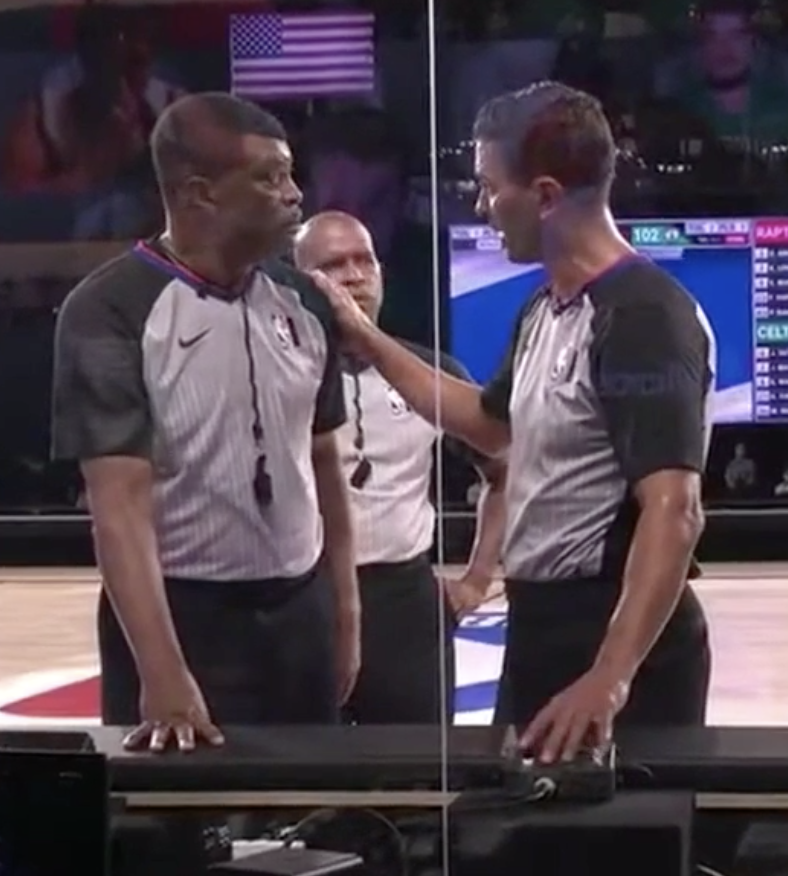 💭 Angles are everything. Always move to put yourself in the best position to have the most ideal angle of your primary coverage area. Avoid being “stacked” where your coverage area is blocked. There’s no rules to moving as an official. Find your angle and make the correct call with confidence.

💭 Be confident in your call. You’re the expert. You’re the one getting paid to make the call. When it comes to using instant replay, see below for more specifics. However, don’t have the thought that the replay monitor will save you from making the correct call on the floor. You should always make every effort to make your call on the floor at the time it occurred.

💭 An official crew’s pre-game conversation can be one of the most important aspects of calling a clean game. See below for a few thought starters for your next pregame:

That’s a wrap for Volume 2 of the Daily Burst from the Bubble! Now, here’s the time to get better.