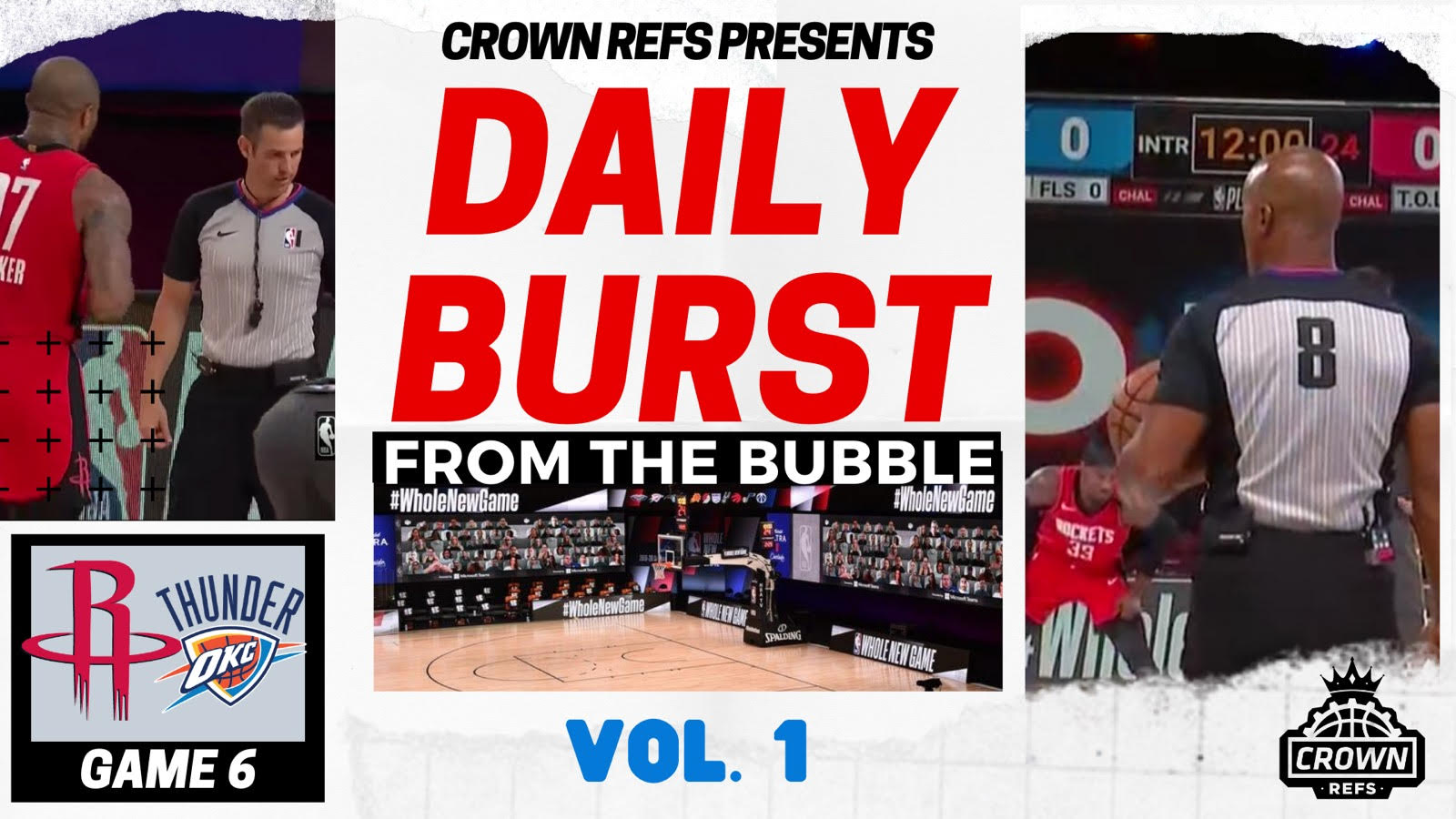 In our first volume of Daily Burst from the Bubble, we highlight what is turning into a newfound rivalry between the Oklahoma City Thunder and the Houston Rockets.

With Dennis Shroder and Chris Paul working as a tandem to slow down the scoring prowess of James Harden and the small-ball Rockets, tension has been building the entire series, as technical and flagrant fouls have become a common occurrence.

Our daily burst comes with 4:19 left to go in the 4th quarter, as the Rockets held a five point lead.

As you’ll see in the below clip, our featured series of events starts with an offensive charge foul called against Dennis Shroder, as P.J. Tucker takes a charge outside of the restricted area.

Before we get into the play, let’s take a look at our featured official in Volume 1 – Kevin Scott. Kevin is the lead official in our burst video clip.

Kevin Scott has officiated 448 regular-season games and eight playoff games in eight seasons as an NBA official. His most memorable assignment so far has been a quadruple-overtime game between the Atlanta Hawks and the Utah Jazz on March 25, 2012.

Before making his debut in the NBA, he officiated four seasons in the NBA G League, where he  was selected to work the Finals in 2011. Before the G-League, Scott was a college official, with four years in the SEC and 10 years in the Atlantic Sun Conference.

As the ball goes up on the initial shot, the lead official, Kevin Scott, has his eyes locked in on the players rebounding. As Tucker locks in the defensive rebound, Scott is not too quick to start running down court, which may be one of the keys to making the next call.

Tucker passes the ball up to Harden, but Shroder ends up stealing the ball and looks to score. Watch how even-keeled Scott is as he notices the turnover. He slowly backs into position without taking his eyes off the play. If Scott was too quick to move up-court to try and be even with the fast break before the steal, Scott may have missed the big call. 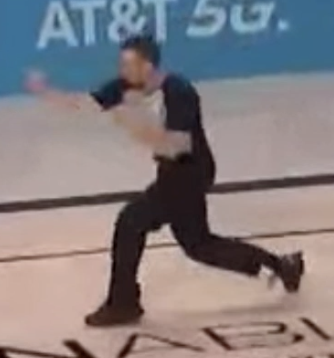 Even when Shroder takes off and goes for the driving layup, Scott has his eyes down, looking at Tucker’s feet and position. What Scott does well in this scenario is slowing down and taking his time to make the correct call. At first glance or even to non-official viewers, some would say,

“That’s a late call! Why did he take so long to make the call? He must have guessed because there’s no way he knew what happened.”

You’ll see Scott crisply blow his whistle, make three steps to gather his thoughts (and see who the foul was on), and then give one of the cleanest charge calls you’ll see in the business. The ability to make a strong, sharp punch motion portrays confidence and expertise in the call.

Don’t watch the ball when it’s in the air, especially when you’re in the lead position. Practice watching the scuffle and fight for the ball – especially on rebounds. Your goal should be to look for legal/illegal boxing out, pushing in the back, and off-ball fouls in your area.

Quick, bang-bang plays like this one can be some of the most difficult calls to make in any level of basketball. To officials who don’t referee games at the high school level or higher, the restricted area isn’t much of a concern to them. However, in the NBA, the restricted circle is one of the most important aspects in determining whether a play should end in a blocking or charging call. 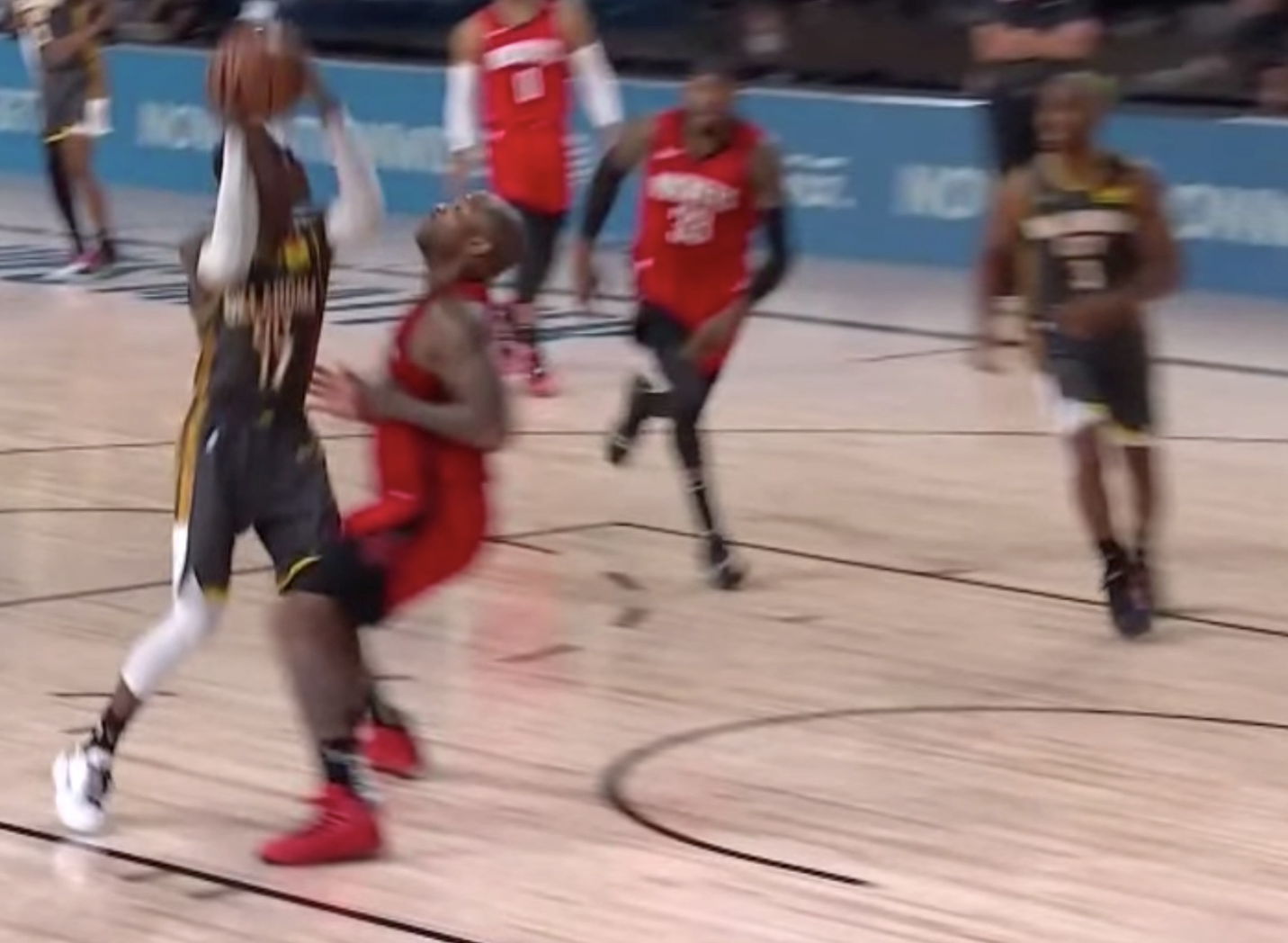 As soon as Tucker commits the turnover, he does a wonderful job establishing position outside of the arc and planting both feet and going straight up.

As stated above, Scott is in great position and is looking at two things:

Next time you watch a game, put yourself in the position of a specific official. Try to make calls as if you were in the game. Would you make similar calls as the official you are watching on television? It’s an easy way, not only to learn some rules you aren’t 100% confident on, but also to practice your real-time reactions to specific situations.

What happens after Kevin makes the charging call shows what nine seasons refereeing NBA basketball does to you. It gives you patience. After he makes the call, Chris Paul shows his frustration with the throwing of the fists at Scott, as well as some choice words, we can assume.

Rather than instantly blowing his whistle out of disagreement with Paul’s reaction, Scott does a perfect job in being calm and collected, as he warrants Paul a technical foul.

As you can imagine, every playoff game is a high-pressure environment. Players and coaches get heated out of their competitive drive. It would be easy to give out a technical foul every time a player/coach disagrees with your call. However, what can separate you from other officials is how you interact and communicate with players and coaches.

While there is no room in the game for players throwing their hands at you and yelling at you, it is vital to be a resource for coaches and players. Talk with them about why you made a call, explain to them the rules behind the violation and tell them what they can do to eliminate a violation in the future.

Think about the last time you actually talked with a player or coach. Do you practice two-way communication or are you guilty of doing more talking than listening and more correcting them for being in the wrong?

That’s it for Volume 1 of the Daily Burst from the Bubble! Now, here’s the time to get better.

What areas of the play were most impressive to you? Out of the three areas of the game summarized above, what segment do you need to improve the most? What are your biggest strengths while officiating?

Let’s connect! Comment your thoughts and feel free to provide feedback on how these Daily Bursts from the Bubble can help you become the best official you can be.