Communicating with coaches – it’s a topic many officials tend to stray away from because it can get uncomfortable. I know for me, it’s an area of the game I used to dread for many years.

It got to a point where I can remember I would make calls just in order to please a coach so they wouldn’t be in my ear the next trip down the court. Reflecting on it now, that sounds horrible, and it is! There isn’t a place in the game for coaches to mess with the rules of the game and dictate the outcome of a play.

So, what can we do as refs to ensure this fear of communicating with coaches doesn’t happen? How can we manage and set communication expectations from the tip-off through the final buzzer?

Not everyone is direct and outgoing. Not every official is ready to go when coaches yell and criticize a call they just made. That’s just the way it is. However, no matter your personality, our job as refs is to serve the game and run the contest the way it was made to be played.

One might think one way to combat the communication issue is to over-communicate. Let’s take a glance at how this may go.

Every trip down a coach is commentating and chirping.

“What did my player do there?”

“Call it both ways!”

The list of remarks is endless, but that’s besides the point.

If we were to be reactive to all of coaches’ responses, we would spend more time having conversation and explaining our calls than we would actually officiating the game.

OK, so should we just ignore the coach whenever they yell at us?

When you’re firm, you let them know you’re not here to have conversations. You’re here to make decisions on the court and serve the game.

Taking all of the above into consideration – using selective ignoring and not being reactive, one of the most vital aspects of communicating is setting expectations early.

Something I do is draw a line in the sand early in the game. Whether this be in the first quarter or whenever you hear a remark from the sideline.

We can allow the coach one free time to yell/react/complain/argue about a play. This way, if it happens again, we enter the second conversation with leverage, which allows us to control the dialogue.” 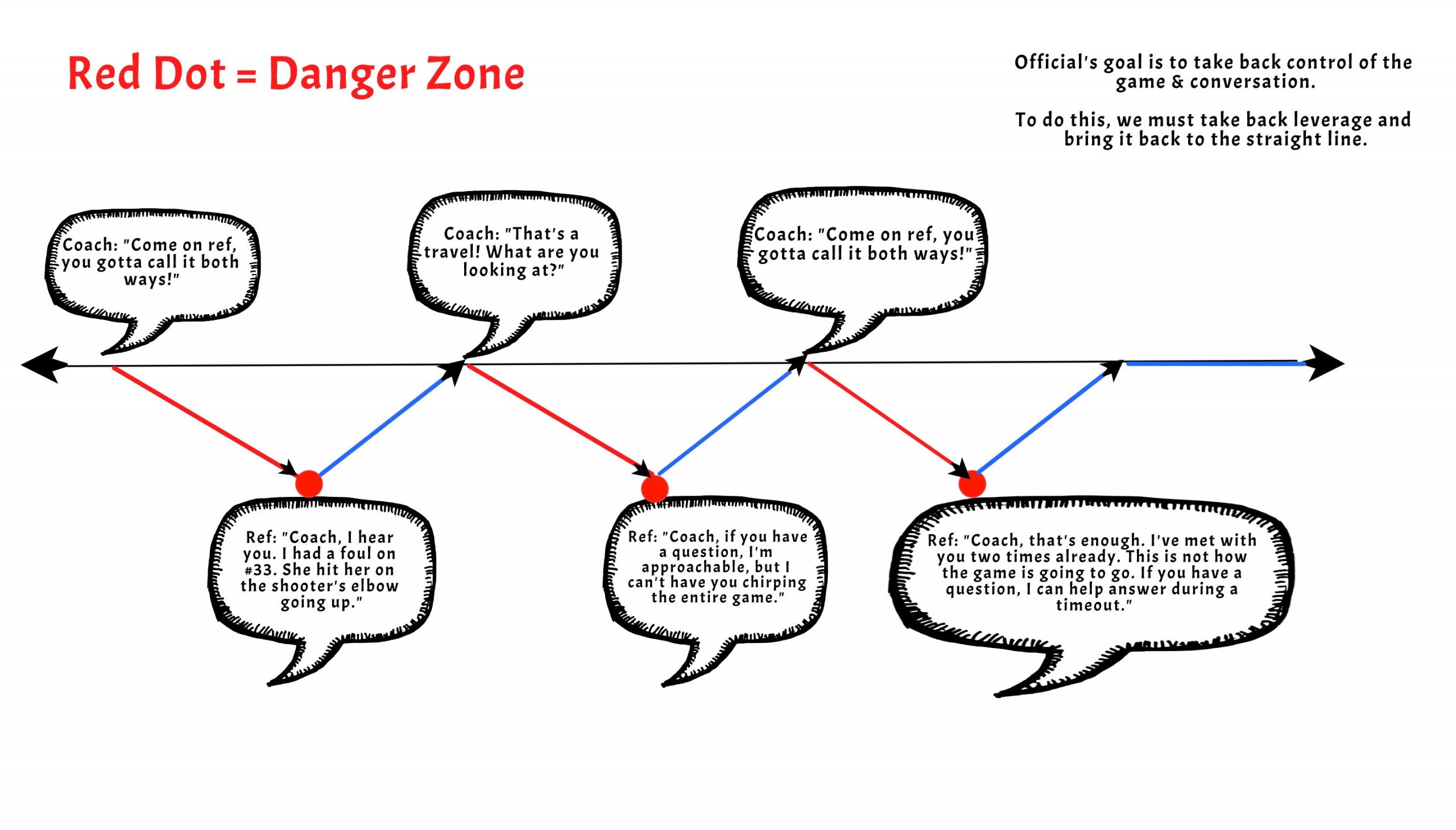 We can’t allow coaches to control us. We need to get the control back and regain leverage. We must do this by being professional and using empathy by listening.

Take care of this early in the game and don’t let it linger. We’re here to make decisions on the court, not have small-talk and at length conversations.

We dictate the terms of the dialogue. We dictate when we have encounters & conversations and how it’s going to be communicated. Otherwise, coaches are going to take control and dictate how the game will go in terms of communication.

Don’t ref for ratings. I’ve officiated games where my life-long friends are the coaches, and I’ve had games where the coach has a history of disagreeing with every call I’ve made.

What’s difficult for me is finding the balance in terms of communicating with coaches. Some coaches are very verbal and want to talk to you the entire game. On the other side of the spectrum, some coaches are quiet and to themselves. One area that I have had trouble with is when one team’s coach is talking with me and it appears I’m neglecting talking to the opposing coach.

This has happened a few times, and what I do now is approach the quiet coach at half time and make it a priority to connect with him/her. Ask them how their season is going. See if they have any questions on any calls made in the first half, any areas their players are working on, etc.

In my opinion, if I was a coach, and I had an official come up to me and ask if I had any questions, I would respect them much more than I already had.

However, we must not ref for ratings. Of course, being a good person and being approachable is one thing. But we shouldn’t officiate an entire game in order to get on the ‘good side’ of coaches. Our goal is to make decisions, make the correct calls and serve the game.

To check out the entire video interview, click the video BELOW!