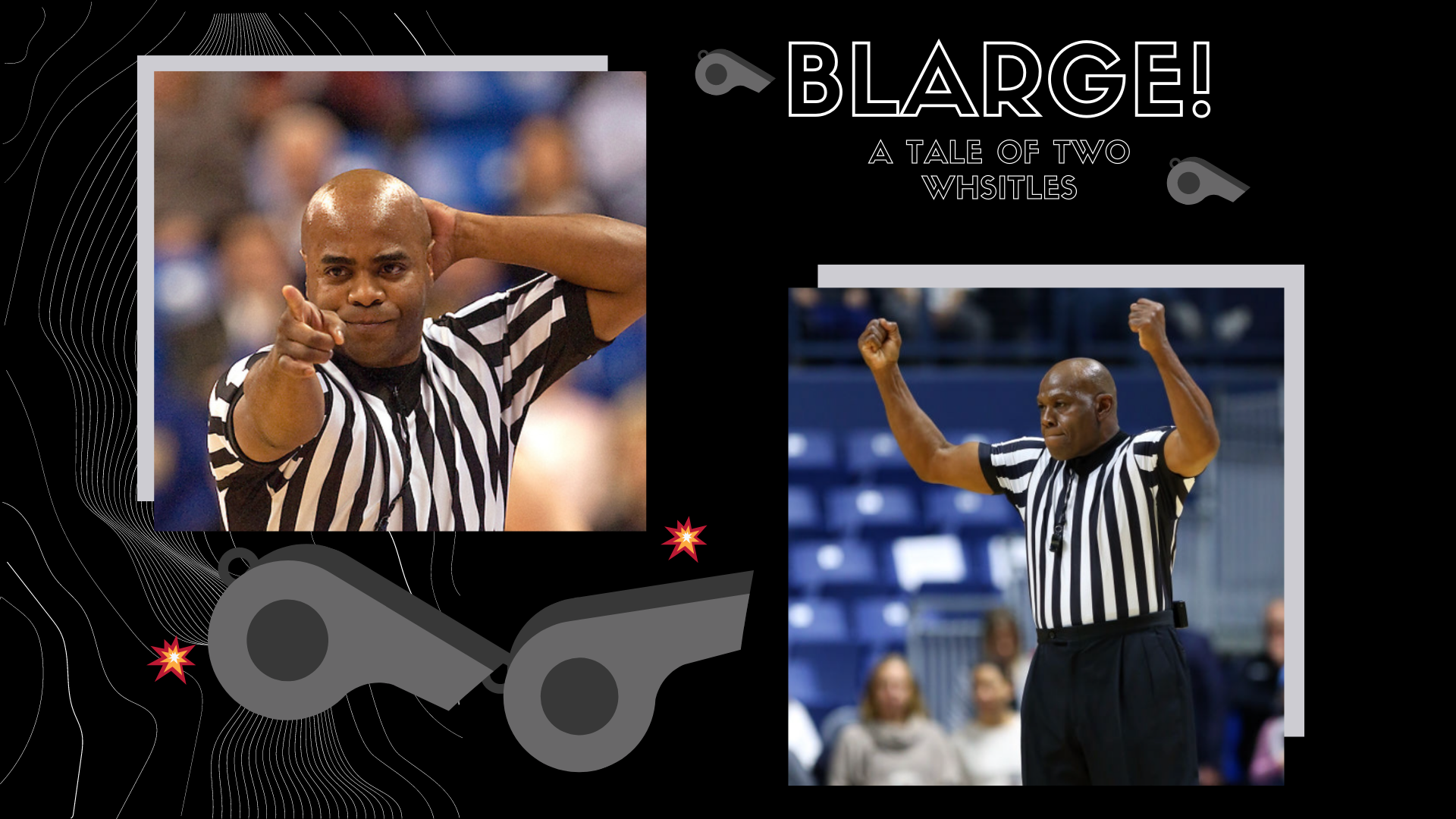 A blarge? What is that? Is that a typo?

If you’ve been officiating for decades or even just a few games, you’ll come to recognize the block/charge call is one of the most difficult calls in the game of basketball. It’s a bang-bang play that warrants quick and accurate decision making, while also being sound in mechanics and rules knowledge.

As you know, a drive or move to the basket may result in contact between the offensive and defensive player. While refereeing the defense is one of the pillars of basketball officiating, the official must determine if the defensive player has established and maintained a legal guarding position.

Before we get into the specifics, check out this video from #OfficiatingBornVideos for some added color on a Blarge that occurred in a high school boys contest.

OK – now that we have a few examples of what a ‘blarge’ is, let’s go to the rulebook.

For a typical player control scenario, in order to avoid a blocking violation, the defensive player may move to maintain legal guarding position‐laterally, backwards or obliquely, just not forward. while also maintaining his/her own vertical plane.

If contact does occur, this where we, as officials, must determine if the contact between A and B is illegal, a Charge by A or a Block by B, or if the contact made provides no clear advantage or disadvantage to either player.

In the case of double whistles, the outside official may take this call, as he/she might have the best look. However, as with every whistle, there might be a space in time where one official may call and signal two opposite calls at the same time.

In this case, one official calls “Block,” while the other official calls and signals “Charge” simultaneously. When there are two whistles followed by two opposite calls, this is when the ‘blarge’ comes into play.

According to the 2020-2021 NFHS Case Book, a blarge is a double foul and must be processed as the below –

In some situations, it might be the outside official (Center or Trail) who takes the play.

By rule in any double foul situation, both the offensive player and defensive player would be charged with personal fouls and the ball would be administered at the Point of Interruption (POI) to the offensive team at the spot nearest to where the foul was called, with no reset of the shot clock.

Any time there are two or more officials calling two different fouls, we must continue with the double foul. Double whistles with opposing calls aren’t the best look for us officials, so how can we clean this up so we don’t even have to cross this double whistle, double foul, blarge bridge?

How can we avoid this moving forward?

Well, we’ve all heard the phrase of letting your partner live and die with their call in their PCA, but let’s dive into this a little deeper.

How to Avoid a Blarge

To avoid a Blarge, the Trail and Center officials should hold their preliminary signals (AKA stop the clock), make eye contact and await to see if any of their partners present their signal. The trail or center official might blow their whistle and stop the clock to signal a foul, but then hold on adding the block/charge signal. We call this the “Post and Hold.”

This Post and Hold hesitation ensures the Lead official has the call in addition to the eye contact communication between the Lead and outside calling referee.

Here’s some additional tips to avoid a blarge situation:

There are 2 general rules of thumb for double whistles in 3-person crews:

Submit to the referee in whose primary-coverage area (PCA) where the foul occurred. If the play comes from another official’s PCA, that official has the play all the way to the basket. This is where composure and patience by each official will serve the game well, as more than one whistle is often sounded on these plays in the lane area.

If a double whistle does occur and a blare situation arises, be quick to recognize when your partner has sounded the whistle. Just because you blew your whistle, does not mean you have to display a signal right away. Instead, stop the clock with a closed fist, but do not give a signal to show the type of foul. If in the Trail or Center position, we should be patient with our whistle, as this can sometimes be outside of our PCA.

For example, if the ball starts in the Trail’s PCA, the Trail official will stay with the play as the Center and Lead officials monitor the player driving the basket and the waiting or helping defender(s) in the lane. Remain calm and composed by slowing down your mechanics, make eye contact with your partners ASAP and let the flow of the game come to you.

Add more patience to your patience.

If a blarge does occur, get together with the crew to discuss the administration of the play. Report both fouls. Determine the POI. Proper communication and proper pre-game conversations can solve and lessen the likelihood that these situations will arise, but if we do fall into a blarge scenario, let’s use the below points to get through it together as a crew.