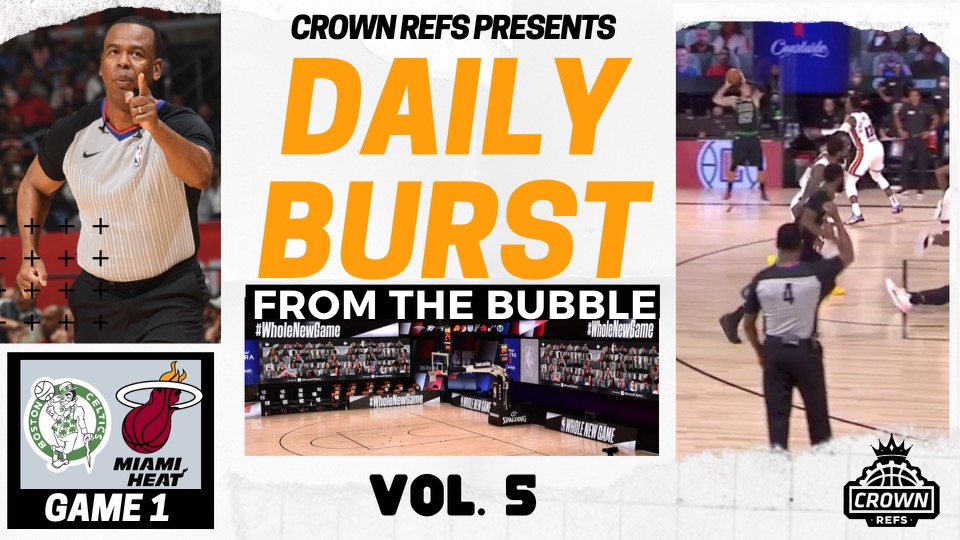 Quick Intro: Center official Sean Wright calls a personal foul on Derrick Jones Jr. as he runs into Marcus Smart while attempting to run through a screen.

In today’s fifth volume of Daily Burst from the Bubble, we spotlight game 1 of the Celtics and Heat Eastern Conference Finals series.

Our featured play comes with 0:22 left in the 4th quarter in a tight game, which eventually needed an overtime period to decide the winning team.

As always, before we dive into the featured play, let’s re-introduce our official, Sean Wright #4. 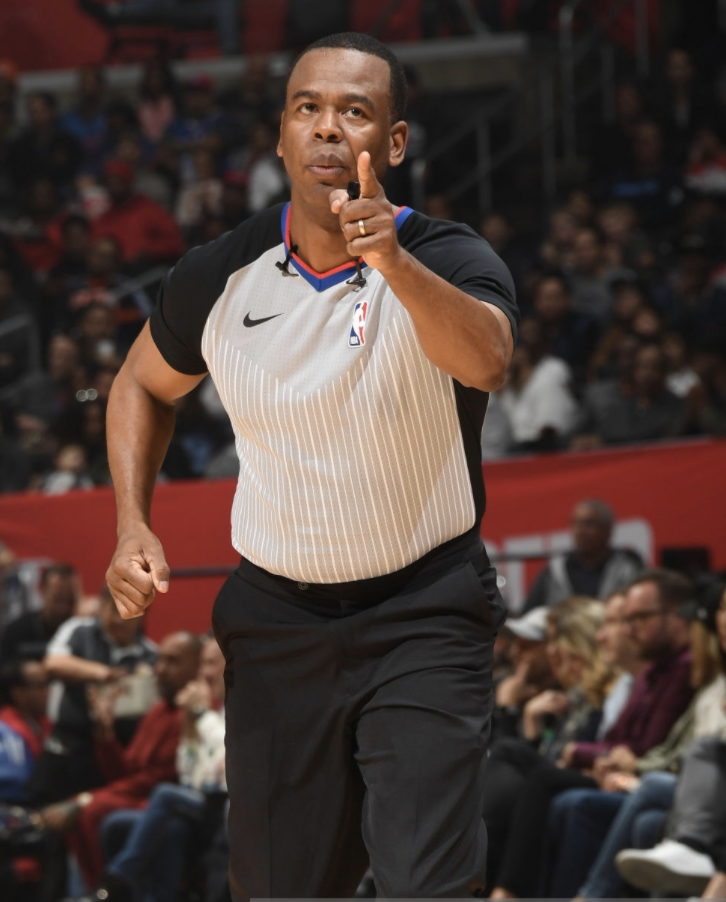 If you read Volume 4, you’ll know Sean is going into his 15th season as an NBA referee, Sean has officiated 842 regular-season games and 53 playoff games. Take a look at Volume 4 for a more in-depth biography on Sean!

Our featured play starts with an out of bounds play with 22 seconds left in the 4th quarter.

As the Celtics inbounded the ball on the sideline following a timeout, Smart drew a foul on Derrick Jones Jr. before the pass was thrown in-bounds.

On this play, you’ll see official Sean Wright is in the Center position and has his eyes on the play at hand. His position at the time of the call was perfect, as he didn’t even have to move to get a better angle.

There’s not a whole lot to unpack on this play, as the play appears to be straight forward. We will get into the violation, itself, in the ‘Play Calling’ section. However, the mechanics and positioning are flawless by Sean.

Crisp whistle – closed fist – walks over to the score table with confidence.

One thing I really like about how Sean handled this pressure play, as there is only 22 seconds left in violation, was how poised he looks when the entire Heat team is disagreeing with him.

After watching this play call by Sean Wright; what can you do to learn and improve your game?

Two concepts jump out right away:

Practice your positioning on inbound plays. Do you know where every position needs to be standing at the time of an inbound? 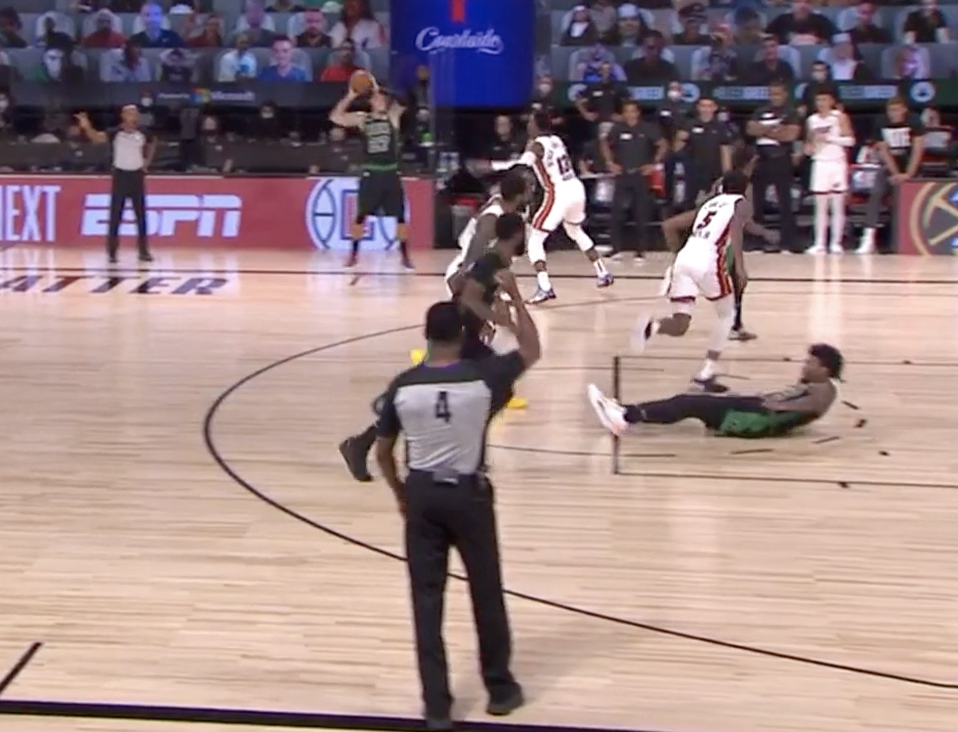 Next time you’re watching a game on television, pay close attention to each official’s positioning at the time the trail official hands the ball to the inbounder, during the inbound play and how they rotate and position themselves after the ball is inbounded.

It’s an area of the game I know for a fact I don’t practice often (but should), and is an area we all can become better at. It’s the little things and odd experiences that will only help improve your play calling and knowledge of the entire game.

The second concept we can learn from Sean is the way he handles himself. All of the Burst from the Bubble volumes include a referee who handles themselves with confidence and professionalism, and Sean Wright is no different during this play.

Sharpness, confidence and professionalism are showcased here, and I know for me, I am looking to bring that same sharpness and confidence to my games this upcoming season.

While Jones Jr. is already running toward Smart, who is in a legal guarding position in his path before the contact, Walker veers into Jones Jr., increasing his momentum and driving him through Smart’s space.

Obviously this is a bang-bang play and extremely difficult to make in real-time, but if you go back and watch the clip, you’ll see why Sean called the foul on Jones Jr.

At first glance, I almost thought the foul could have been called on Marcus Smart. However, after the slow motion video, you’ll see Jones Jr. completely run into Smart, while extending his arms to get through Smart.

It’s an extremely tough call, as Smart appears to be sliding to establish himself, but you’ll see Jones Jr., whether intentionally or not, make illegal contact with Smart when trying to fight through the middle of the lane. 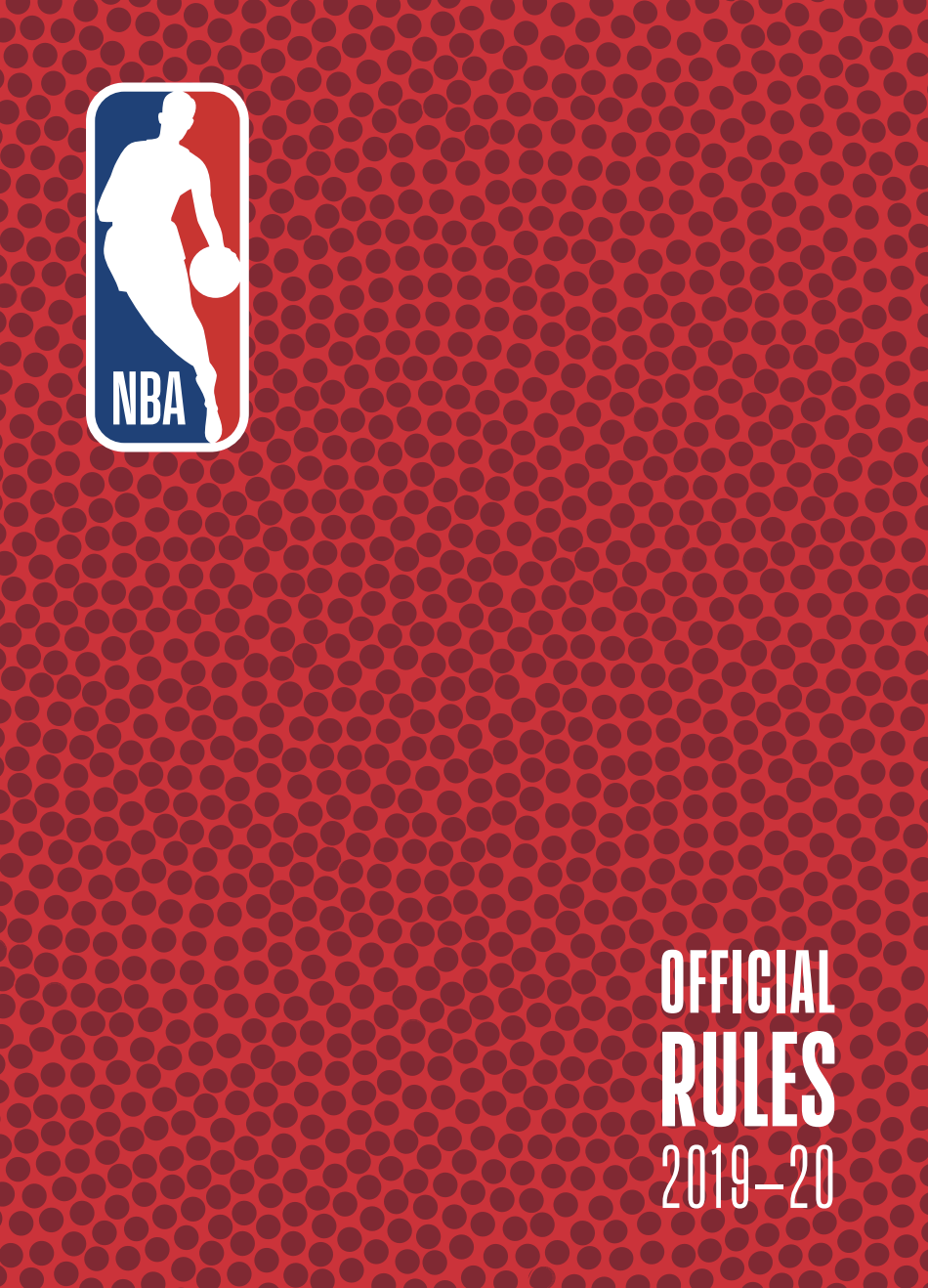 Of course, Smart is skilled with his acting and selling the play, but it is clearly a foul on Jones Jr. making illegal contact and running through the defensive player.

If this call is still hard to decipher, let’s use another example for illustration purposes. If Jones Jr. was trying to fight around a screen or defending an offensive player and made this same type of contact on the defensive side, would it be easier to make this call? Would it be more obvious? Although the two plays and the actual play are not the same, the illegal contact is similar.

Props to Sean for making this call in real-time and with no replay monitor, I might add.

According to the NBA 2019-2020 Rulebook, an away from-the-play foul, which are defined in Rule 4, Section III(h) on page 18, shall be administered as follows:

For further explanation and additional instances regarding inbound plays, take a look at the NBA Rulebook – https://official.nba.com/rulebook/

Understand what happens on a foul that is away from the ball. The rulebook is a great resource, and I like to bring my rulebook to every game and give it a quick read before every game. It may sound dorky, but it has helped me become more confident and knowledgeable in times when an uncommon situation arises.

Always be prepared for anything! One of the worst feelings I get is when a player/coach asks me a technical question about a call and I don’t have a solid answer for him/her. If we are experts at our craft, there is nothing to worry about when you step on the floor.

As we’ve said before, managing the game after a big play call is made is vital to the rest of the contest.

You’ll see Sean getting questioned by Heat players and coaches as soon as he blows his whistle; and that’s expected. However, Sean’s calm demeanor as he walks to the score table provides a lesson for us.

Instead, he does the following:

One underrated part of the clip that you can catch for a quick second is Marc Davis standing up for Wright. You’ll notice Heat coach, Erik Spoelstra, is talking with Davis and Marc is explaining the call and sticking up for his crew member (we can assume).

No matter who you’re reffing with, there’s one thing that’s for certain. You are a unit. For those two halves or those four quarters, whatever the case may be, you are responsible for taking care of eachother. You are a team.

In my opinion, and I learned this the hard way, one of the worst remarks you can say about a play that wasn’t in your area is, “Sorry coach, that wasn’t my call.” 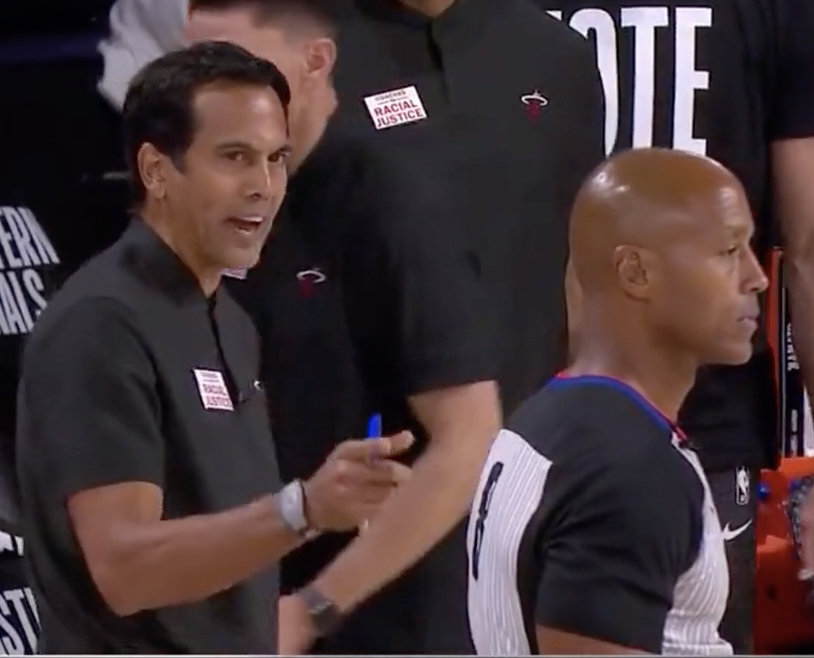 In other words, “Coach, that play wasn’t in my zone. Ask the official who made the call.”

Of course, that may be true. But like I said, we must stick together! In a game that we already get so much criticism, we have a crew for a reason, and that is to help each other make as many correct calls as possible and make the game a safe and competitive environment.

Rather than putting all responsibility on your fellow team members, a better way to approach the situation when a coach complains about a foul that was truly out of your position, try phrasing your response like the following,

“I see what you’re saying, coach. However, the call was XXXX because player XXXX did XXXX…”

Give an explanation to the call your partner made, and never throw him/her under the bus. It not only makes you look unprofessional, but it is a bad look for your entire crew.

Little communication hacks like this have helped me grow closer with both my ref partners, as well as the coaches and players we officiate. I’m no expert, but it has made a great difference.

Illegal contact is illegal contact. Whether running through a screen, making contact with an offensive player, fighting for a loose ball, etc. The fact that Sean was able to make this call instantly and with no hesitation is a testament to his experience and expertise.

Jones Jr. is sucked into a defensive position where he had no choice but to foul Smart. Even though Jones Jr. did not intend to make this contact, the fact of the matter is that he did, and that’s an illegal contact call.

This type of loose ball foul where the ball has not yet been inbounded warrants one free-throw and the ball. Test yourself next time you see a situation like this.

Never throw your crew under the bus. While it sounds like common sense, it can be difficult to confront coaches and players in the moment. I know for me, especially in my first few years of reffing, if a coach asked me about a call that my ref partner made out of my primary coverage area, I would say, “That wasn’t my call. It was out of my area.”

I later found out how badly this sounds to outsiders. Stick up for your crew; you’re a team just as much as the players and coaches are. We have to stick together as refs.

That’s a wrap for Volume 5 of the Daily Burst from the Bubble! Now, here’s the time to get better.